Price Now $70.00
Was
Was
Save $0.00 (0%)
This product is not eligible for further discounts.
Questions and Answers
Availability: In Stock
This item is in stock and ready to ship. Depending on the time of day when you place your order, it will ship same day or next business day. 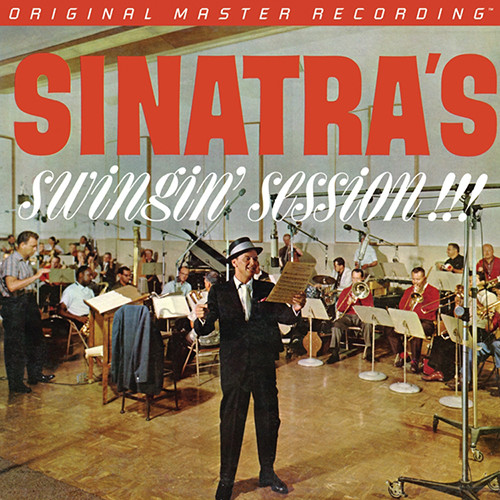 Fastest-Paced Swing Effort of Frank Sinatra's Career Pairs Him with Arranger Nelson Riddle: Singer Not Only Keeps Time with the Hard-Driving Band on Sinatra's Swingin' Session!!!, He Leads the Parade

Legend has it that when Frank Sinatra initially stepped into the recording studio for the first of four sessions, he asked Nelson Riddle to speed up the tempos to the songs that landed on Sinatra’s Swingin’ Session!!! It’s safe to say that the arranger followed orders and that the results—buoyant, cheery, fun, exuberant, zesty, and wonderfully jazzy—speak for themselves. This 1961 effort remains the Chairman’s fastest, hardest-swinging set. And oh, how it swaggers.

Mastered from the original master tapes, Mobile Fidelity’s numbered-edition hybrid SACD of this gem possesses a punchiness, immediacy, forcefulness, and dynamic heft that rivals even what’s heard on a pristine original Capitol pressing—provided you can even find one. This disc will help convert your room into a studio stuffed with horn players and percussionists, with Sinatra, decked out in a trademark fedora and suit, holding court at the center of it all. Sinatra’s Swingin’ Session!!! isn’t a live album, but it hits with the gusto and tang of one.

Forget about incorrect rumors that state that this album was only completed due to contractual obligations and that Sinatra hurried through the material. No matter the circumstances, nothing here is tossed-off or rushed. As always, Sinatra takes it all seriously, pouring his all into each of the dozen tracks here. He wouldn’t have it any other way. Name another singer from his era (or any) that could possibly keep time with these uptempo beats and sound as if he isn’t even breaking a sweat. Needless to say, Sinatra has a blast making it all happen.

Riddle’s arrangements help push forward the tunes, whether they be happy standards such as “When You’re Smiling (The Whole World Smiles With You),” optimistic finger-snappers like “S’posin’,” or the evergreen “Blue Moon,” punctuated with a memorable tenor sax solo. Melodies unfurl like red ribbons on packages; grooves alternate between galloping and gallivanting; even ballads can’t resist moving to joyous rhythmic patterns. Throughout, Sinatra’s casual, uninhibited singing rises above the band, producing emotions that are at once frisky, lighthearted, pleasurable, and contagious. Dust off your dancing shoes.

1. When You’re Smiling (The Whole World Smiles With You)
2. Blue Moon
3. S’posin’
4. It All Depends on You
5. It’s Only a Paper Moon
6. My Blue Heaven
7. Should I?
8. September in the Rain
9. Always
10. I Can’t Believe That You’re in Love With Me
11. I Concentrate on You
12. You Do Something to Me
Related Videos
Review: MoFi Electronics' Turntable Trio - UltraDeck, StudioDeck and Foundation
Customers Also Bought