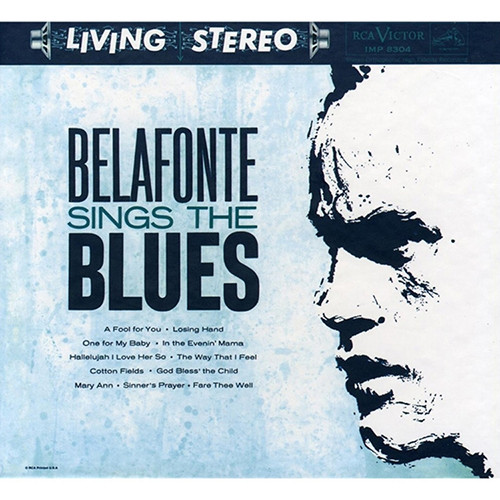 Belafonte Sings The Blues, the inimitable singer's favorite recording, finds music legend Harry Belafonte illuminating the timeless words and music of the American blues in truly breathtaking sound. The stunning 11-track effort was recorded over four sessions during the first half of 1958 and released by RCA later that year.
The album features sublime performances of numerous Billie Holiday, Johnny Mercer, and Ray Charles titles, interpreted in a way that only Belafonte can. The blues are close to Belafonte's heart and it clearly shows here on his renditions of such classics as "One For My Baby," "Hallelujah I Love Her So," "Cotton Fields" and "God Bless the Child."
Belafonte has never before sung on records as he does on Belafonte Sings The Blues. He is freer, more earthy, and more exultantly identified with his material than ever before. He has always communicated an often ferocious power as well as lyrical sensitivity, but in this collection he achieves a unity of emotional strength in and understanding of his material that marks an important stage in his evolution as an artist.
There is not much to say about the individual performances that is not entirely clear on hearing them. Truly a classic for discerning audiophiles, Belafonte Sings The Blues was the first Belafonte album recorded in stereo. The sound is incredible and this Hybrid SACD edition from Analogue Productions preserves every exquisite detail!
Features:
• Hybrid Stereo SACD from Analogue Productions
• Mastered by Ryan Smith at Sterling Sound
• Compatible with both CD & SACD players as well as SACD-compatible DVD players
Harry Belafonte Belafonte Sings The Blues Track Listing:
1.  A Fool For You
2.  Losing Hand
3.  One For My Baby
4.  In the Evenin' Mama
5.  Hallelujah I Love Her So
6.  The Way That I Feel
7.  Cotton Fields
8.  God Bless the Child
9.  Mary Ann
10. Sinner's Prayer
11. Fare Thee Well
Customers Also Bought