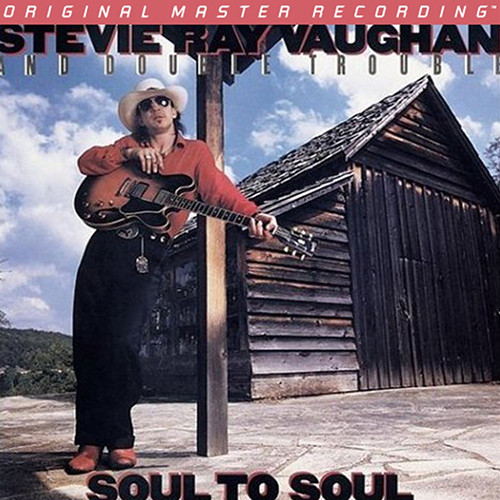 Stevie Ray Vaughan’s myth making was already complete by the time that his third record in as many years was released in October 1985. But no one could have expected the artistic leaps and additional prowess the guitarist displays on Soul to Soul, a record on which Vaughan added a full-time keyboardist and saxophonist, and dug deep into his native state’s musical well for soul, R&B, and surf motifs. The rate at which the Texan was growing as a first-rate composer and virtuosic instrumentalist is evident throughout what became his most diverse album to date.

Mastered from the original master tapes, Mobile Fidelity’s SACD brings Vaughan’s tremolo bar dynamics, heavy-duty fills, blistering runs, and soulful ache into pristine focus. More importantly, the raw tones from his Stratocaster guitar, triumphant carry drawl of his voice, and every knee-buckling string bend are captured with extreme delicacy, so you don’t miss a note. What’s more, the more spacious arrangements get plenty of sonic legroom to stretch out on a vast soundstage.

While mindful of the blues’ capacity to mourn and ponder, Vaughan concentrates on turning every song into an occasion for hope, no matter the subject. He and Double Trouble—now complemented by keyboardist Reese Wynans and saxophonist Joe Sublett, the expansion indicative of the guitarist’s interest in jazz, R&B, and, true to the album’s title, soul—aim to soothe, treating each note as an extension of their own feelings. Recorded at a time when the pop landscape became inundated with plastic synthesizers, mechanized beats, and robotic emotion, Soul to Soul brings music’s basic elements back home, exploring roots passages while taking Vaughan’s hallmark fusion down a road that travels from Dallas to Memphis to New Orleans and beyond.

Teasing out textural possibilities, Vaughan comes up roses on a dramatic rendition of Hank Ballard’s “Look At Little Sister” as well as on “Life Without You,” the latter typical of the balladic tenderness that a man equally adept at shoot-you-through-the-back barnstormers was capable of expressing. Also present is a more delicate use of melody, a capacity undoubtedly related to Vaughan’s boundless intimacy with the guitar, which is at one with his hands.