Price Now $99.99
Was
Was
Save $0.00 (0%)
Questions and Answers
Availability: In Stock
This item is in stock and ready to ship. Depending on the time of day when you place your order, it will ship same day or next business day. 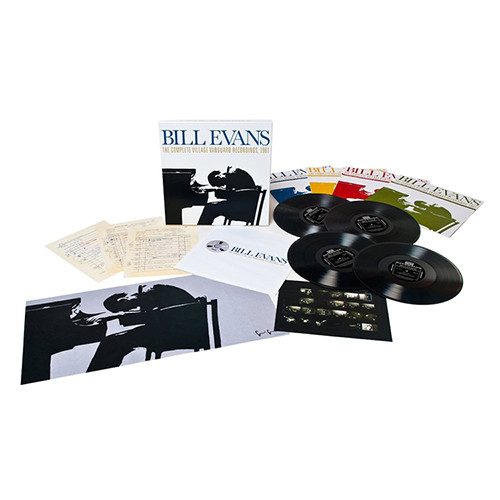 Be alerted when Bill Evans - The Complete Village Vanguard Recordings, 1961 (Vinyl 4LP Box Set) is back in stock

Mastering/Lacquer Cutting by George Horn and Anne-Marie Suenram at Fantasy Studios and Pressed at RTI
Acccompanying 12-Page Booklet includes New Liners by Reissue Producer Bill Belmont & Original Liners by Orrin Keepnews
Reproductions of Session Notes & Photographer Steve Schapiro's Proof Sheets Add Vintage Context to the Packaging
This is it. The breakthrough. The pinnacle of spontaneous musical communication. Three men breathing as one on a tiny bandstand. Everything Bill Evans, Scott LaFaro, and Paul Motian had been working on for the previous 18 months led to this moment. The intimate, contrapuntal dialogues between Evans's poetic piano and LaFaro's bass, as swift as the wind. Motian's sustained riveted ride cymbal providing a carpet of stars.

The ballads, as deep and heartbreaking as any wee-small-hours Sinatra. The startlingly beautiful bass solos, so sensitively recorded. The mobile rhythms and quietly inter-weaving phrases. There is a fresh discovery here: take one of LaFaro's "Gloria's Step," an ever-so slightly flawed beauty. There is the clear-eyed annotation of Orrin Keepnews, producer of all of Evans's Riverside albums. And finally, there is the crowning glory of these performances, the last ever by this singular trio.

This box set is the ultimate collectable item for any jazz fan. Pressed on 180-gram vinyl, this four-LP set comes with a 12-page booklet, complete with new liner notes by reissue producer Bill Belmont, as well as the original liner notes by the producer of the original recordings, Orrin Keepnews.

Reproductions of session notes and photographer Steve Schapiro's proof sheets from the performances add vintage context to the packaging. Also included in the box is a stunning metallic and black poster of the famous cover – Evans, in profile, deep in concentration at his piano.

This box set is the definitive keepsake for audiophiles, Bill Evans fans and jazz collectors, alike, and, in its limited run, will go quickly!