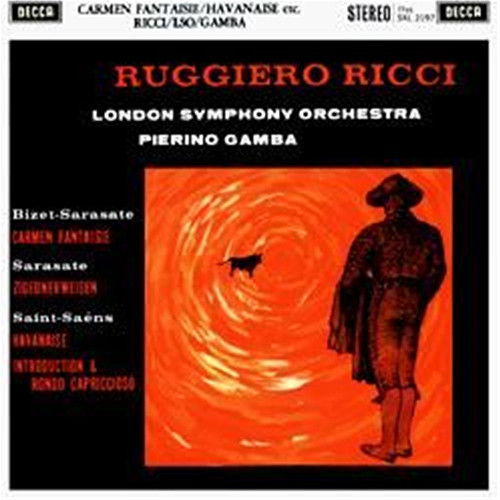 Some violinists enrapture their audience with their purity of tone, others with their warm timbre, or their amazing technical virtuosity. Pablo de Sarasate y Navascuéz was one of the very few violinists who combined all these merits, and in addition was a composer in his own right. The most famous of his 50 works are Zigeunerweisen, based on traditional gypsy folklore and the fiendishly difficult Carmen Fantasy.And what better proof is there than Saint-Saëns’s Rondo capriccioso that it is perfectly possible to unite high-spirited joyfulness with a minor key. As the name suggests, his Havanaise is filled with the melodies and colourful rhythms of Spain: no wonder this piece is known as “the violinists' warhorse”.

It goes without saying that these 19th-century bravura pieces are an absolute “must” for all those who wish to join the annals of great virtuoso violinists. And today, 40 years after the making of this recording, general consensus has it that Ruggiero Ricci has taken his rightful place among the great virtuosos.