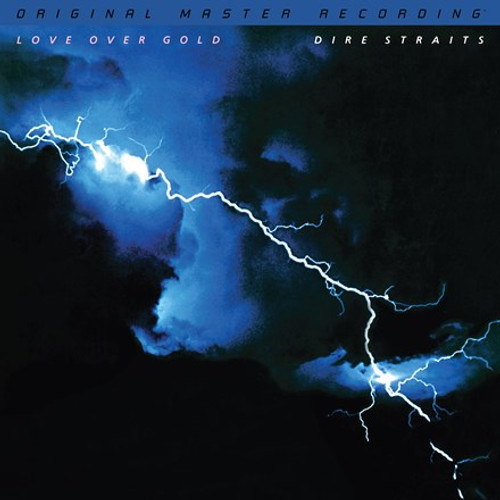 Love Over Gold is all about contrast, tension, and crafty composition. Dire Straits' fourth album finds the band continuing to evolve by welcoming increasingly bold arrangements and exploring moody variations. Parts edgy and sharp, and part seductive and relaxed, the five lengthy songs on Love Over Gold sprawl out like a long, winding road cutting through a pastoral landscape. The addition of a new rhythm guitarist, Hal Lindes, encourages deeper atmospheric interplay while the presence of engineer Neil Dorfsman – his first appearance in what would be a long string of collaborations with Mark Knopfler – ensures stunning sonic properties that now come to life like never before.

On this audiophile pressing, everything Knopfler does seemingly turn to gold. Gearheads will hear the unique characteristics afforded by his use of a Mesa Boogie Mark II guitar amplifier (soon again employed on Brothers in Arms) and carefully chosen selection of Schecter Stratocasters, 1937 National steel guitar, and Ovation six- and twelve-string models. Reference-level separation and lifelike imaging place Knopfler and company in your room, while tube-like warmth, spaciousness, and airiness causes the music to breathe anew. This LP will be in your rotation for months.

It doesn't take long to realize Love Over Gold is like no other Dire Straits album – and a staunch proclamation of independence from a band that continued to take longer creative strides with each successive project. Fearlessly extending over metaphoric hills, valleys, and plains for nearly 14-and-a-half minutes, the opening "Telegraph Road" is a guitar hero's dream and exhilarating showcase for Lindes' give-and-take capabilities. In tandem with keyboardist Alan Clark, Lindes provides the ideal foil for not only Knopfler but the long-time rhythm section of bassist John Illsley and drummer Pick Withers.

Taking its time to arrive at destinations, the quintet paints evocative musical and lyrical portraits steeped in patience, drama, and, often times, sadness. Desolate emotions color the sweeping "Telegraph Road" and barren "Private Investigations," which finds Knopfler in the role of a tired private eye contemplating the emptiness and scars of his profession. Vocally, the Dire Straits leader remains in top form throughout, his whiskey-coated rasp conveying romantic ache, ongoing frustration, and what Rolling Stone beautifully deemed "wracking schizophrenia between the heart and the heartless, the loving and the pain."