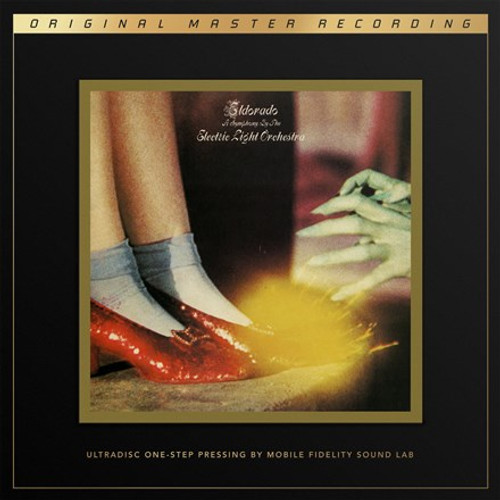 A Bold Celebration of Romantics, Escapists, and Dreamers: Electric Light Orchestra's Eldorado Marries Rock and Symphonic Elements, Includes the Aptly Titled Hit "Can't Get It Out of My Head"

Electric Light Orchestra leader Jeff Lynne did more than figuratively reach for the sky on Eldorado. Daring to be bold, and creating imaginative worlds that invite the listener to escape the mundane, the visionary composer-musician achieved a multidisciplinary fantasia and, in the process, a prog-rock landmark. Nearly 50 years later, the concept album's brilliance can be experienced like never before in cinematic, IMAX-worthy fashion.

Mastered from the original analog master tapes, pressed on MoFi SuperVinyl vinyl at RTI, housed in a keepsake box, and limited to 10,000 numbered copies, Mobile Fidelity's UltraDisc One-Step 180g 45RPM 2LP set of Eldorado allows the longtime audiophile staple to resonate with reference-grade dynamics, tones, and colors. Conjuring the feeling of journeying to different horizons, the record's songs teem with layer upon layer of details, which can now be heard as the producers intended. This very special release both pays tribute to the record's merit and enhances the spectacular program for generations to come.

Presenting the album with breathtaking clarity yet retaining the warmth, texture, and emotion that differentiate live music from reproduced sounds, the collectible reissue features beguiling levels of in-the-moment presence, grand-scale soundstaging, and instrumental balance. Bursting with a veritable cornucopia of stimuli, MoFi's Eldorado package also benefits from superb separation and immersive atmospherics that stem from the meticulous remastering process – as well as an ultra-low noise floor, industry-leading groove definition, and dead-quiet surfaces courtesy of the MoFi SuperVinyl properties.

The premium packaging and gorgeous presentation of the UD1S Eldorado pressing befit its extremely select status. Housed in a deluxe box, it features special foil-stamped jackets and faithful-to-the-original graphics that illuminate the splendor of the recording. This reissue exists as a curatorial artifact meant to be preserved, touched, and examined. It is made for discerning listeners who prize sound quality and production, and who desire to fully immerse themselves in everything involved with the album, from the iconic artwork to the meticulous finishes.

An artistic breakthrough that established Electric Light Orchestra as a pioneering band (and confirmed Lynne as the leading practicing Beatles disciple), the 1974 effort remains notable for its involvement of a full orchestra and choral section, the range of which are captured with exquisite results on this LP. Eldorado distinguished itself from the band's first two works not only via Lynne's sharpened songwriting but due to the hiring of an orchestra that augmented the group's three string players. Co-arranged by Lynne and conductor Louis Clark, the symphonic movements bolster the contagious fare without ever drowning it. The accents also act as transports into the varied narrative universes.