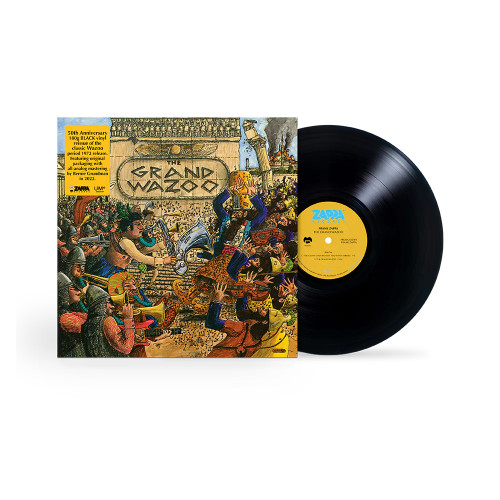 In celebration of half a century of the pioneering early 1970s phase of Frank Zappa's peerless career, which resulted in the two albums Waka/Jawaka and The Grand Wazoo, Zappa Records/UMe reissue the two records on 180g vinyl LP with original packaging and all-analog mastering by Bernie Grundman in 2022.

Waka/Jawaka and The Grand Wazoo are traceable back to Zappa being pushed off stage at the Rainbow Theatre in London by a crazed attendee in late 1971. After this, he found himself recuperating for months in his home in the hills of Los Angeles. Although he was confined to a wheelchair and in immense pain, his work ethic could not be tamed, and he would end up having one of the most prolific years of his hugely prolific career.

Rehearsals started for the album recording sessions sometime in late March/early April, and once the material was honed to his satisfaction, Zappa and crew decamped to Paramount Studios where recording began on April 10, 1972. By the end of the month, Zappa, who handled production, guitar, and conducting duties, had recorded the bulk of two albums, the jazz-influenced Waka/Jawaka (intended by Zappa as a sequel to Hot Rats), recorded with a lineup of six to nine musicians, and the epic and ambitious jazz-fusion masterwork, The Grand Wazoo, recorded with a larger ensemble ranging from eight to as many as 20 musicians.

Waka/Wazoo commemorate fifty years of Zappa's incredible output in 1972, a year when he found recovery and "blessed relief" in his art.