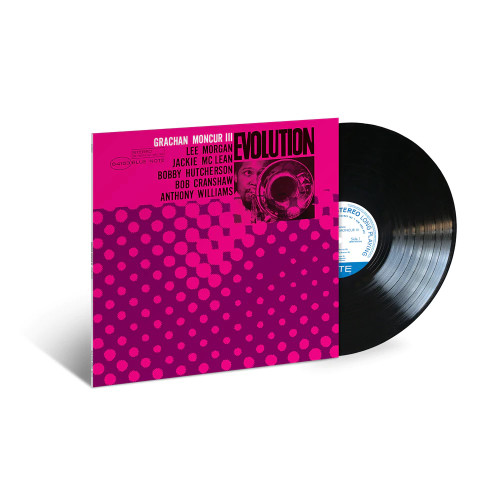 Though he first appeared on Herbie Hancock's 1963 album My Point of View, trombonist Grachan Moncur III's first true Blue Note introduction would come on two albums by saxophonist Jackie McLean that were recorded later that year: One Step Beyond and Destination... Out! These two great inside-out sessions presented a spacious new sound that moved fluidly between avant-garde and post-bop territory with McLean featuring Moncur's singular compositions. Several months later Moncur returned to Van Gelder Studio to record his own remarkable debut album Evolution, which remains a marvel of the Blue Note catalog. For the date the trombonist assembled an exceptional ensemble that returned several musicians including McLean, vibraphonist Bobby Hutcherson, and drummer Tony Williams, with the addition of Lee Morgan on trumpet and Bob Cranshaw on bass. The band delivers dynamic performances of four expansive original pieces by Moncur: "Air Raid," "Evolution," "The Coaster," and "Monk In Wonderland."