Price Now $164.99
Was
Was
Save $0.00 (0%)
This product is not eligible for further discounts.
Questions and Answers
Availability: In Stock
This item is in stock and ready to ship. Depending on the time of day when you place your order, it will ship same day or next business day. 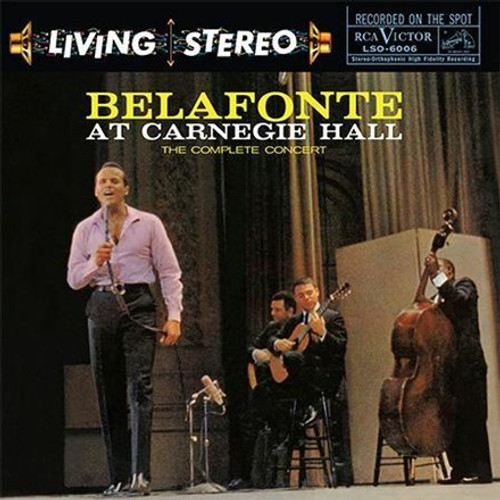 Harry Belafonte has always been a musical chameleon. Using a thick base of folk music, he added blues, soul, jazz, pop and a plethora of various Caribbean styles to create albums that were unique, socially relevant and just plain entertaining. The first of his two essential live recordings produced by Bob Bollard at New York's famed Carnegie Hall features material culled from two identical performances on April 19 and April 20, 1959 to benefit The New Lincoln School and Wiltwyck Scholl respectively.

Belafonte At Carnegie Hall was documented at the height of the singer's success when it wasn't fashionable to record outside of the studio environment, yet it proved to be an artistic and commercial breakthrough for the music legend, earning a nomination for Album of the Year at the 1961 Grammy Awards and lingering on the charts for over three years. The revered 19-track affair is divided into the three acts Moods of the American Negro, In the Caribbean, and Round the World, and finds Belafonte's world class voice wonderfully supported by a a small combo of two guitars, bass, and percussion, and a perfectly timed 47-piece orchestra conducted by Robert Corman.

Analogue Productions presents the entire concert as a 200g 45RPM 5LP box set. The fifth disc in this premium collection includes tracks previously missing from prior editions due to space limitations. They include Belafonte's spoken introduction before launching into the touching and tender "Scarlet Ribbons," followed by the orchestral overture. Spread over 5LPs, the wider-spaced grooves reduce distortion and high frequency loss and let your stereo cartridge track more accurately. Mastered from the original analog 3-track tapes by Ryan Smith at Sterling Sound, plated and pressed by Gary Salstrom and the crew at Quality Record Pressings, and housed in a custom-designed slipcase box.