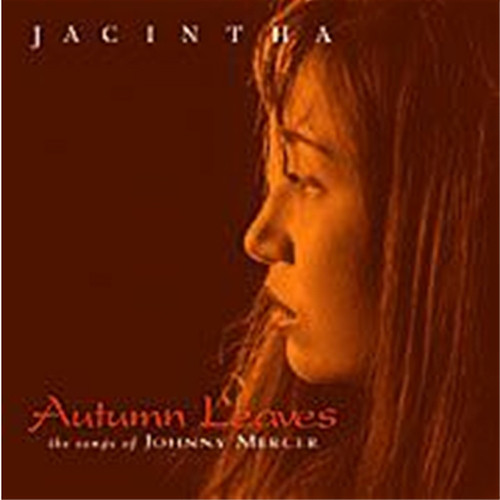 'Autumn Leaves' finds Jacintha in excellent form and, once again, delivering several strong performances on many of the songs. One of the highlights of the album is the title track which finds Jacintha singing in the original French intro and first verse as well as the later Johnny Mercer English lyrics.

We weren't the only ones impressed with Jacintha's vocal prowess, she also caught the attention of Bordertown Pictures (Touchstone Pictures) and a team arrived during the recording session to capture a brand new version of the Grammy-award winning song 'Here's To Life.' With Jacintha featured on vocals and the backing of Kei Akagi (piano), Teddy Edwards (tenor sax), Larance Marable (drums), Joe La Barbera (drums) and Darek Oles (bass) the musicianship on the recording is fantastic. Artie Butler, the Grammy winning composer of 'Here's To Life' was also in attendance and played the Hammond B-3 organ on the track! The song was featured in the opening title sequence for the Ron Shelton film 'Play It To The Bone.'

'Play It To The Bone,' by Touchstone Pictures (a division of the Disney Corp.,) is directed by Ron Shelton (Bull Durham, Tin Cup, Blaze, White Men Can't Jump) and stars Antonio Banderas, Woody Harrelson and Lolita Davidovich. The film was released nationwide on January 14, 2000.

This album includes Jacintha's performance of 'Here's To Life' as a bonus track on the 45rpm extra LP. The album was recorded live direct to 2-track and was mastered using Sony's new Direct Stream Digital (DSD) process by Bernie Grundman in Hollywood to produce an album of true audiophile quality sound.