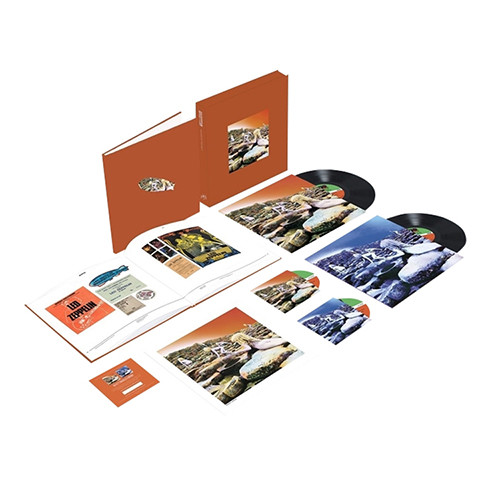 Led Zeppelin reissues don't come any better than this Super Deluxe Edition box set of Houses of the Holy, which contains both the 180g LP and CD of the remastered album, the previously unreleased companion audio on 180g LP and CD, a hardbound album-sized 80-page book with rare and previously unseen photos and memorabilia, a high-quality print of the original album cover, and a high-def audio download card of the musical content at 24-bit/96k (live tracks are 24-bit/48k). This is what all deluxe reissues should aspire to be.
Painstakingly remastered from the original master tapes by guitarist Jimmy Page, and pressed at Pallas (Europe's best plant), this 180g LP of Houses of Holy sounds amazing. Page spent years on this project with one goal in mind: Making these reissues the end-all-be-all definitive editions of his iconic band's records. He has succeeded, and then some. In addition to the reference-caliber audio, each LP features packaging that fully replicates the look of the first pressing of the original album.
The companion audio for Houses of the Holy gives fans the first peek into the band's recording sessions, with different mixes of seven tracks. They include rough and working mixes for "The Ocean" and "Dancing Days" that reveal a deeper look inside the recording sessions of these classics. Other standout recordings include the guitar-mix backing track for "Over The Hills And Far Away" and a version of "The Rain Song" without piano. Nobody outside of Zeppelin's inner circle has ever heard these until now.