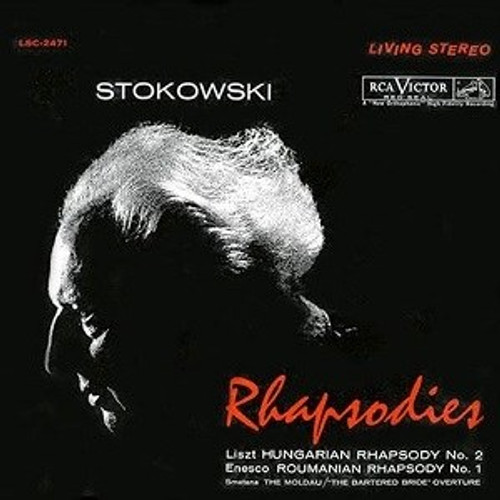 Customers Also Viewed
Description
Stokowski - Rhapsodies - Liszt - Enesco on 200g LP
RCA Living Stereo Series from Analogue Productions
25 Premier-Sounding Titles from RCA's Living Stereo Golden Era Available on 200g LP (Cut at 33 1/3) & Hybrid SACD (Most Will Be 3-Channel)
Remastered from the Original 3-Track Session Tapes & Recut by Engineer Ryan Smith at Sterling Sound in New York
RCA's "golden age" was more like a "golden minute" - in a scant period, roughly from 1958 to 1963, the beginning of the stereo era - pure vacuum tube amplification helped produce recordings demonstrating unparalleled fidelity and warmth, lifelike presence and midband illumination.
Maestro Leopold Stokowski is at the podium and Bob Simpson is at the 3-track Ampex recorder to capture the Rhapsodies from Liszt, Enesco and Smetana that give this RCA Living Stereo release its title. This is titanic sound that will sink most speakers and amps for that matter in a good way! The original 3-track session tapes were used in the mastering of these LP and SACD reissues.
Pressed at Quality Record Pressings and plated by Gary Salstrom. Packaged in the original tip-on jacket facsimiles that precisely duplicate the original cover art, including the "Living Stereo" logo, LSC numbers and "Shaded Dog" label. These reissues are designed from the mastering, to the cutting, to the pressing and packaging to be the finest RCA Living Stereo LPs ever reissued. These new versions are clearer than the originals and warmer and richer than past reissues!
Musicians:
Composer -  Liszt / Enesco / Smetana
Conductor -  Leopold Stokowski
Stokowski - Rhapsodies - Liszt - Enesco Track Listing:
1.  Liszt - Hungarian Rhapsody, No. 2
2.  Enesco - Roumanian Rhapsody, No. 1
3.  Smetana - The Moldau / "The Bartered Bride" Overture
1. Liszt - Hungarian Rhapsody, No. 2
2. Enesco - Roumanian Rhapsody, No. 1
3. Smetana - The Moldau / "The Bartered Bride" Overture
Related Videos
How We Pack Your Records At Music Direct
Customers Also Bought