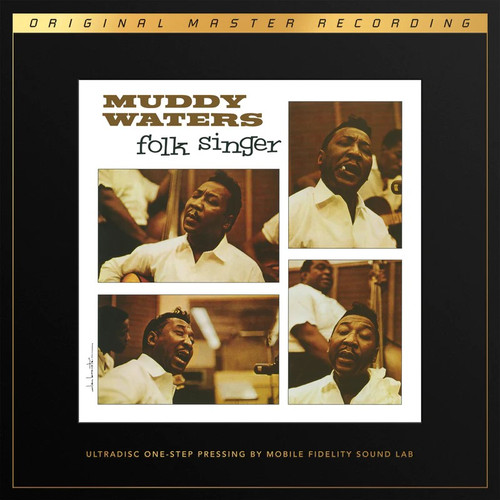 Mastered From The Original Master Tapes And Limited To 10,000 Numbered Copies

Muddy Waters' Folk Singer remains rightly revered as the greatest-sounding blues album ever released – and, to date, one of the only bonafide audiophile records in the genre. Originally issued in 1964 by Chess Records, the all-acoustic work has made the rounds as a demonstration disc and benefitted from myriad reissues, all of which sought to improve upon Willie Dixon and Ralph Bass' legendary, subtlety-abundant production while bringing the musicians into your room. More than five decades after Waters, Buddy Guy, and company initially gathered in a Chicago studio in September 1963, those feats (and more) are finally accomplished in definitive, unsurpassed fashion courtesy of Mobile Fidelity.

Limited to 10,000 numbered copies, pressed on dead-quiet MoFi SuperVinyl at RTI, and mastered from the original master tapes, Mobile Fidelity's ultra-hi-fi UltraDisc One-Step 180g 45RPM 2LP collector's edition pays tribute to the album's merit and enhances the intimate program. Playing with reference-setting sonics that more than justify its existence in a field filled with prior audiophile reissues of Folk Singer, this spectacular collector's version provides a clear, transparent, ultra-dynamic, and up-close view of a set that inspired Rolling Stone to deem it the 282nd Greatest Album of All Time and proclaim it "a pioneering 'unplugged' set beloved by blues and folk fans alike."

The premium packaging and beautiful presentation of the UD1S Folk Singer pressing befit its extremely select status. Housed in a deluxe box, it features special foil-stamped jackets and faithful-to-the-original graphics that illuminate the splendor of the recording. No expense has been spared. Aurally and visually, this UD1S reissue exists as a curatorial artifact meant to be preserved, touched, and examined. It is made for discerning listeners that prize sound quality and production, and who desire to fully immerse themselves in the art – and everything involved with the album, from the iconic photos to the gorgeous finishes.

Such potency reveals itself explicitly on a vinyl set afforded uncanny reproduction of Waters' tobacco-stained singing, booming reach, robust acoustic guitar, and instrumental accompanists – a Hall of Fame group that comprises a very young Guy, stand-up bassist Dixon, and drummer Francis Clay. Accurately portraying the scale of a human voice remains one of the most difficult tasks to accomplish on a recording. And yet the timbre, richness, and realism of Waters' singing here convey the authority of its inner cavity and considerable depth, allowing notes to individually register all the while pairing with succeeding rhythmic passages in seamless fashion. The presence, feel, and contributions of Waters' esteemed colleagues register, too, with the lifelike nature rivaled only by sitting in a small venue. Indeed, few albums of any style resonate with the reference levels of spaciousness, openness, and "room as an instrument" qualities to the extent of Folk Singer.

Because of the production's unassailable reputation, ironically, the actual performances on Folk Singer often get short-changed or overlooked. That's a mistake. While much ado about the record's folk-like character and allegedly new direction surrounded the release, Waters' fourth proper album is nothing but the blues – and a direct extension back to his Delta lineage and non-amplified roots. Sincere, emotional, direct, spontaneous, and interpretive, Waters and his mates follow a soulful path, completely skirting any notion of prescribed commercialism or pigeonholed definition. Folk Singer echoes with flexibility, liberty, and the artists' own unsullied visions. It could have happened on a Maxwell Street corner on the streets of Chicago.

Or, as Mr. Bass writes in the original liner notes: "Muddy's rich vibrant tones, sometimes pleading, sometimes whispering, occasionally shouting and chanting, tells [sic] us the story of a blues singer or for lack of a better word – a folk singer who can't tell you his story the same way more than once, whose interpretation changes as his mood and nostalgia serves him as on that one memorable day I asked Muddy to sing 'The Blues.'" Memorable storytelling, both in the narrative and instrumental form, dominates Folk Singer, from the autobiographical "My Home Is in the Delta" to a cover of the Sonny Boy Williamson staple "Good Morning Little School" to the solo "Feel Like Going Home."

Throughout, the nine songs transmit the innate proficiency and learned knowledge of virtuosos as they slowly roll and tumble with unmitigated freedom, informal playfulness, and understated sympathy. Steeped in the ways of the country, Folk Singer registers with a magnetic power and palpable force by keeping quiet, in the process redefining what it means to be loud – as well as popular notions of the blues itself. What a ride.

More About Mobile Fidelity UltraDisc One-Step and Why It Is Superior
Instead of utilizing the industry-standard three-step lacquer process, Mobile Fidelity Sound Lab's new UltraDisc One-Step (UD1S) uses only one step, bypassing two processes of generational loss. While three-step processing is designed for optimum yield and efficiency, UD1S is created for the ultimate in sound quality. Just as Mobile Fidelity pioneered the UHQR (Ultra High-Quality Record) with JVC in the 1980s, UD1S again represents another state-of-the-art advance in the record-manufacturing process. MFSL engineers begin with the original master recordings, painstakingly transfer them to DSD 256, and meticulously cut a set of lacquers. These lacquers are used to create a very fragile, pristine UD1S stamper called a "convert." Delicate "converts" are then formed into the actual record stampers, producing a final product that literally and figuratively brings you closer to the music. By skipping the additional steps of pulling another positive and an additional negative, as done in the three-step process used in standard pressings, UD1S produces a final LP with the lowest noise floor possible today. The removal of the additional two steps of generational loss in the plating process reveals tremendous amounts of extra musical detail and dynamics, which are otherwise lost due to the standard copying process. Every conceivable aspect of vinyl production is optimized to produce the most perfect record album available today.