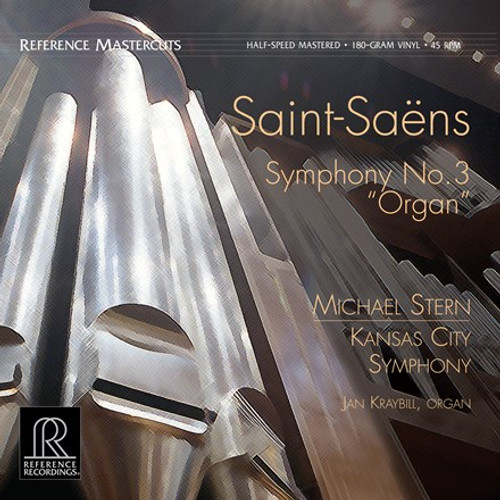 Superb new orchestral release from Reference Recordings featuring conductor Michael Stern leading organist Jan Kraybill and the Kansas City Symphony in a thrilling performance of Camille Saint-Saens' Symphony No. 3 in C minor, Op. 78 "Organ". Composed at his artistic peak, Saint-Saëns said of his Symphony No. 3, "I gave ever thing to it I was able to give. What I have here accomplished, I will never achieve again."

Reference Recordings is proud to present conductor Michael Stern's interpretations of this great work, captured in brilliant sound by Grammy award winners Keith O. Johnson (engineer) and David Frost (producer). The Symphony has released four previous titles with RR to great acclaim – Shakespeare's Tempest, the Grammy-winning Britten's Orchestra, an Elgar/Vaughan Williams project and most recently, Miraculous Metamorphoses, which highlights composers Hindemith, Prokofiev and Bartók. Two additional projects have been recorded and slated for future release, including the music of contemporary American composer Adam Schoenberg (recorded in June 2014) and Gustav Holst: The Planets and Ballet Music from The Perfect Fool (recorded in January 2015).

The Kansas City Symphony is the region's only full-time professional symphony orchestra. Led by Music Director Michael Stern since 2005, the Symphony has experienced impressive artistic growth, garnering national and international acclaim. The orchestra's 80 full-time musicians are area residents, and each season they reach more than a million people through their concerts, educational programs and community outreach performances. They also serve as the orchestra for the Lyric Opera and the Kansas City Ballet.