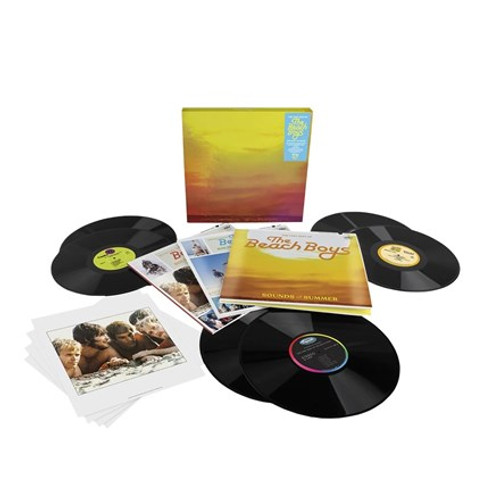 Be alerted when The Beach Boys - Sounds of Summer: The Very Best of: Remastered (180g Vinyl 6LP Box Set) * * * is back in stock

The Beach Boys' triple-platinum certified 2003 hits collection Sounds Of Summer: The Very Best Of The Beach Boys offered up all of the iconic institution's landmark hits. Youthful classics, surfing songs and Pet Sounds groundbreakers all appeared including "God Only Knows," "Good Vibrations," "Wouldn't It Be Nice," "In My Room," "Don't Worry Baby," "Sloop John B," "Barbara Ann" and "California Girls." Originally released with 30 tracks, UMe updates the classic Sounds Of Summer compilation in honor of the band's 60th anniversary with in an expanded 180g vinyl 6LP edition featuring a whopping 80 key tracks from their storied career (all newly remastered) with 24 new stereo mixes, including two first-time stereo mixes. The set comes complete with updated photos and liner notes.

Sounds Of Summer was assembled by Mark Linett and Alan Boyd, the team behind 2013's Grammy-winning SMiLE Sessions and 2021's acclaimed Feel Flows – The Sunflower and Surf's Up Sessions 1969-1971. The 50 additional tracks are a broad mix from the Beach Boys' wide-ranging catalog, such as "All Summer Long," "Disney Girls," "Forever," "Feel Flows," "Friends," "Roll Plymouth Rock," "Sail on Sailor," "Surf's Up," and "Wind Chimes."

The Beach Boys say in a statement: "It's hard to believe it's been 60 years since we signed to Capitol Records and released our first album, Surfin' Safari. We were just kids in 1962 and could have never dreamed about where our music would take us, that it would have such a big impact on the world, still be loved, and continue to be discovered by generation after generation. This is a huge milestone that we're all very honored to have achieved. And to our incredible fans, forever and new, we look forward to sharing even more throughout the year."