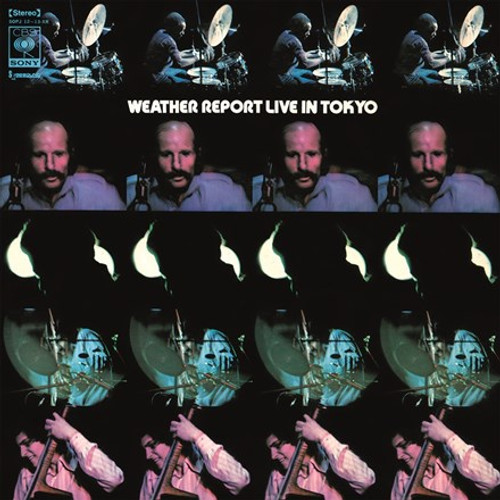 180g Vinyl LP Reissue Remastered Using Pure Analogue Components Only, from the Master Tapes Through to the Cutting Head

The origins and sound of Weather Report are credited to the bonding of jazz veterans Joe Zawinul on keyboards and saxophonist Wayne Shorter. They were acquaintances for a decade before working together with Miles Davis on his transitional sessions of 1969 that led to In A Silent Way and Bitches Brew. It was not long after that Shorter and Zawinul decided to form their own group, partnering with Czech bassist Miroslav Vitous, who had been playing and recording with the likes of Shorter, Herbie Mann, Chick Corea and Stan Getz.

Live in Tokyo, recorded in January 1972 with a new touring drummer (Eric Gravatt) and percussionist (Dom Um Romao), was released the same year in Japan only. The tracks on Live in Tokyo reprised several of the pieces from the band's acclaimed self-titled 1971 debut, mostly in lengthy, highly-charged medleys, with cuts ranging from 11 to 26 minutes. Featuring mesmerizing takes on some of Weather Report's most memorable and celebrated compositions including Zawinul's "Orange Lady" and "Dr. Honoris Causa" and Shorter's "Tears" and "The Moors."