Equipment Amplification Integrated Amp
Price Now $6,000.00
Was
Was
Save $0.00 (0%)
This product is not eligible for further discounts.
Questions and Answers
Availability: In Stock
This item is in stock and ready to ship. Depending on the time of day when you place your order, it will ship same day or next business day. 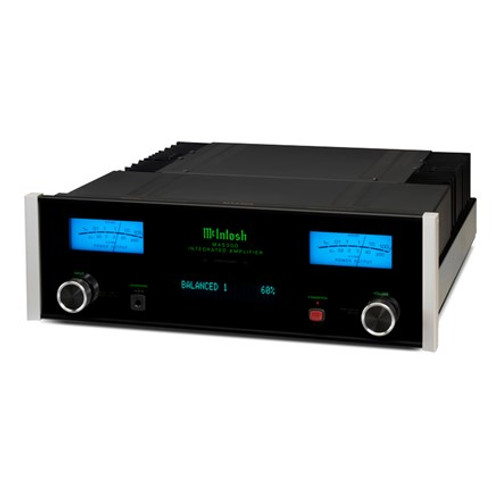 Be alerted when McIntosh - MA5300 Integrated Amplifier is back in stock

Dressed to the proverbial nines with cutting-edge technology, requiring no warm-up time for optimal performance, and featuring high-resolution DSD256 and DXD 384kHz support, the Roon-Tested McIntosh MA5300 integrated amplifier gives music lovers world-renowned McIntosh performance in a component modest in size and cost – but big on sound and flexibility. It's easier to list what isn't present in the stupendously loaded MA5300 than take note of everything here. But we'll take a breath and give it a shot. An eight-channel Quad Balanced 32-bit/192kHz DAC, MM phono preamplifier, High Drive headphone amplifier with Headphone Crossfeed Director, 12 total inputs, and Home Theater Pass Through provide a rich array of high-end functionality. Proprietary Power Guard technology prevents any possibility clipping. New Monogrammed Heatsinks connected to high-current transistors that eliminate the need for warm-up time, enhanced control microprocessors, and high-end circuitry are here, too.

MA5300 is a beast, but knows the importance of balance, finesse, and tone. Played through MA5300, records breathe, unfold with gorgeous dynamics, and sit against black backgrounds. Simply put, MA5300 makes music enjoyable, lifelike, and engaging with ever breaking a sweat. With a beyond-conservative 100Wpc rating (160Wpc into four ohms), MA5300 also brings to your fingertips a wealth of customizable options. Via the supplied remote control, you can rename and preset the level, balance, start volume, and information display for each source. Bass and treble controls give you more customizability. Want to utilize MA5300 as a preamplifier? No problem. You can even turn off the glow on the signature dual-scale Blue Watt meters, but we've never met anyone that would. Still, it's all up to you. The U.S.A.-built MA5300 does all of this and more, all the while housing all digital inputs in a DA1 module that can be replaced by future models as digital technologies advance. How's that for future-proof?

Those that say you can't have it all clearly haven't come across MA5300 – an ideal match for McIntosh's MCD350 SACD/CD player, MCT450 SACD/CD transport, MB100 Media Bridge, MB50 streaming player, and/or XR50 bookshelf speakers. McIntosh's three-year warranty and Music Direct's 100% Satisfaction Guarantee provide further assurance MA5300 isn't too good to be true. If you've always dreamed what it would be like to own a McIntosh, now's the time to make the hypothetical a reality.

"Seven decades of reputation for pride in craftsmanship and performance are something McIntosh takes seriously. Those decades of experience in design and manufacturing are packed into the MA5300. Considering the next more powerful integrated amplifier in the McIntosh line weighs a whopping 75 pounds, the MA5300 size and price become even more attractive. I used it on two widely different speaker designs and could not find fault.... It is a solid performer and a great choice for the core of an outstanding system, where it will outlive many of the other components and never go out of style."
—Don Shaulis, Stereo Times

"The MA5300 proved very adept at channel separation — putting you right in the acoustic sweet spot with the arrangements engulfing you.... The McIntosh MA5300 is beautifully transparent. If you have sources that you bought because you love how they sound, that's what you hear."
—Jay Garrett, StereoNET