Equipment Amplification Preamp
Price Now $5,500.00
Was
Was
Save $0.00 (0%)
This product is not eligible for further discounts.
Questions and Answers
Availability: In Stock
This item is in stock and ready to ship. Depending on the time of day when you place your order, it will ship same day or next business day. 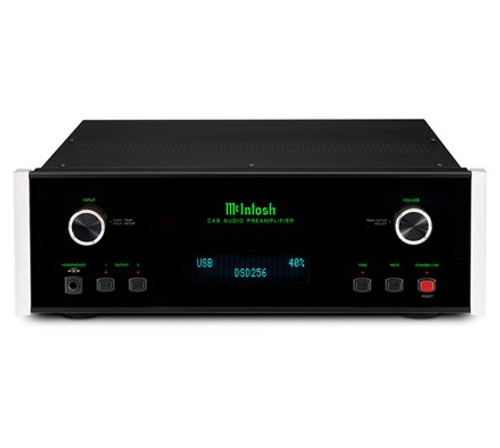 Be alerted when McIntosh - C49 Stereo Preamplifier is back in stock

High-resolution digital upgradability, world-class versatility, captivating sound, headphone drivability, and gorgeous looks come together in harmonious bliss on the McIntosh C49 preamplifier. Equipped with McIntosh's DA1 Digital Audio Module, which can be replaced as new audio technologies develop, the Roon-tested C49 combines outrageously good performance with future-proof viability. Whether you want to listen to music up to DSD256 or DXD 384kHz, C49 decodes and plays back the formats in brilliant fidelity via an eight-channel 32-bit/192kHz DAC in Quad Balanced mode. To optimize SACD playback, C49 touts an MCT input for a custom DSD connection to the McIntosh MCT500 SACD/CD transport. Digital inputs are further covered by way of two coaxial, two optical, and one USB type.

Feeling in an analog mood? This U.S.A.-made legend touts two balanced and three unbalanced inputs as well as a built-in MM/MC phono preamplifier that rivals any standalone phono preamplifier you'll hear for less than $2k. For the ultimate in flexibility, all 13 inputs are always available – meaning you can configure your system however you want. And C49's six-inch height allows it to be placed even in tight spaces. This is a cutting-edge 21st-century entertainment hub in every sense – something you'll realize as soon as you hear the rich, authoritative, expressive sound.

And, yes, we'd be lying if we didn't tell you how much the black glass faceplate with LED illumination, silver knobs, and brushed aluminum end caps will enhance your enjoyment every time you see C49 in your room. When you dream about high-quality stereo components, this is what springs to mind. Our 100% Music Direct Satisfaction Guarantee helps make those dreams come true.