Equipment Amplification Receiver
Price Now $599.00
Was $699.00
Was
Save $100.00 (14%)
Questions and Answers
Availability: In Stock
This item is in stock and ready to ship. Depending on the time of day when you place your order, it will ship same day or next business day. 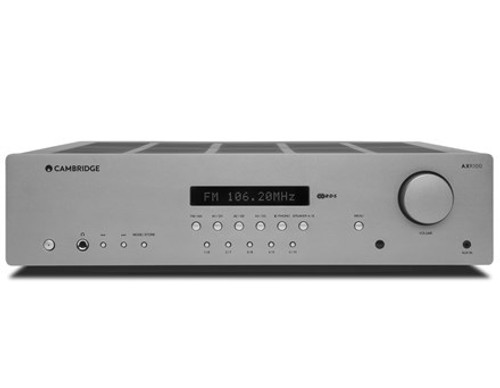 Be alerted when Cambridge - AXR100 Stereo Receiver is back in stock

On appearances alone, the Cambridge Audio AXR100 receiver looks like a four-figure component whose elegantly minimalist aesthetics and attractive lunar-gray front panel come straight from the company's flagship Edge Series. Get closer, and the sturdy casing further gives the impression of a device that commands far more than its ask price. Most importantly, once you factor in its superb feature set – a built-in MM phono preamplifier for vinyl compatibility, a headphone output for private listening sessions, an FM/AM tuner with 30 presets, a remote control, and tone controls – and it's clear AXR100 ranks as one of the biggest audio bargains on either side of the Atlantic.

Offering a strapping 100Wpc output and augmented by a toroidal transformer for deep bass response and rich reproduction of all music types, AXR100 plays with a winning combination of power and purity, putting far more costly competitors to shame. An all-metal case that minimizes vibration rounds out an entry-level high-end product that delivers high-grade performance and a full complement of connectivity options – four analog inputs, two optical inputs, a coaxial input, a subwoofer output, and a REC output – that add to versatility that extend to its potential for interfacing with your TV.

Further afforded a built-in Bluetooth receiver for easy wireless streaming from your phone or computer, AXR100 stands at the ready to handle sources ranging from digital files to CD players to spinning LPs. As it does so, you may notice that it gives the illusion of floating on whatever surface it rests, thanks to the savvy wedge-foot support. Factor in Music Direct's 100% Satisfaction Guarantee, and AXR100 stands at the head of its class.

"[What] makes the Cambridge Audio AXR100 better is the build quality of the built-in amplifiers. Not only are the components higher-grade, but the AXR100 also has both right and left channels, which contributes to more accurate sound."
—Gear Patrol