Equipment Amplification Receiver
Price Now $8,000.00
Was
Was
Save $0.00 (0%)
This product is not eligible for further discounts.
Questions and Answers
Availability: In Stock
This item is in stock and ready to ship. Depending on the time of day when you place your order, it will ship same day or next business day. 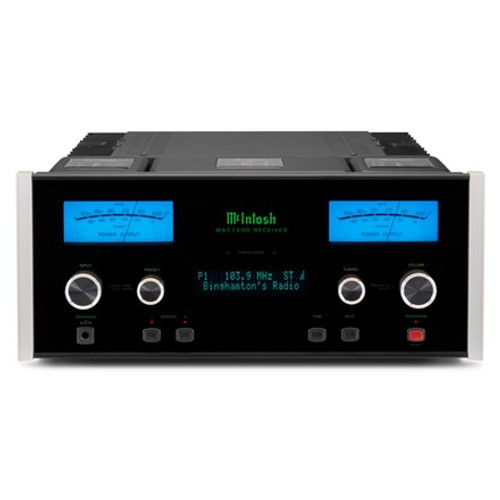 Be alerted when McIntosh - MAC7200 Stereo Receiver is back in stock

A receiver in name only, the McIntosh MAC7200 is actually a world-class amplifier design combined with an incredible preamplifier circuit, eight-channel Quad Balanced 32-bit/192kHz DAC that supports 2x DSD and DXD 384kHz, a powerful headphone amplifier with Headphone Crossfeed Director, and the legendary McIntosh AM/FM tuner. Proprietary Autoformers ensure your speakers receive every last bit of the full 200-watt output. New, Monogrammed Heatsinks effortlessly eradicate heat and eliminate any need for warm-up time. The Roon-Tested MAC7200 also serves as a phono preamplifier via two dedicated phono sections (one MM, one MC). But we're just getting started.

Outfitted with 14 inputs (including a proprietary MCT for purest-possible DSD sound), MAC7200 makes any music sound authoritative, realistic, and engaging. Bass and treble tone controls let you customize the levels of every input. Home Theater Pass Through means MAC7200 seamlessly interfaces with your existing home-theater system. The presence of patented Power Guard circuitry prevents clipping and further protects your speakers from damage. Similarly, McIntosh's Sentry Monitor improves the reliability and lifespan of MAC7200.

This U.S.A.-built instrument also houses all digital inputs in a DA1 Digital Module that can be replaced by future modules to keep everything current, even when technology changes. A mammoth power supply, upgraded microprocessors, Blue Watt meters, and McIntosh's unique black glass faceplate swing the balance further in favor of MAC7200. Aesthetically, we cannot fully express just how beautiful this component looks when the lights are turned low and records are playing. Our 100% Satisfaction Guarantee means you've got nothing to lose to see – and hear – how MAC7200 will bring joy to your life in your own home.

"Where the MAC7200 shines, is it's engaging, but ever so slightly relaxed tonal rendition. The MAC7200 has more than enough audiophile cred, yet those craving the last molecules of fine detail will probably go elsewhere. That's not the point, and that's never been the McIntosh ethos. What really makes the MAC7200 standout is the magic it brings to every recording you own. And for the other 99.99% of us that aren't fussy audiophiles, this is what it's all about."
– Jeff Dorgay, TONEAudio

"The MAC7200 belongs in Class A of Stereophile's Recommended Components list. Yes, [it is expensive] ... but its power, resolution, dynamics, and transparency are among the best I've heard. Its internal DAC's transparency, speed, and imaging provided strong competition for my Bryston BDA-3. The phono and line preamplifiers excelled in their versatility as well as delivering transparent midrange, tuneful bass, and open highs. The amplifier allowed the Quad Electrostatic 989s to play loud with great dynamics."
– Larry Greenhill, Stereophile

More About the Inputs, Preeminent Tuner, and Customization Options
For analog, one balanced and five unbalanced inputs join one MC and one MM input to connect turntables. For digital, two coaxial and two optical inputs, one USB and one proprietary MCT input give you a plethora of options. All inputs can be given custom names for user-friendly system control and configuration. The coax and optical inputs support up to 24-bit/192kHz files. The built-in AM/FM tuner comes from the same illustrious line of McIntosh tuners and will pick up your favorite radio stations with unparalleled clarity and a realism that is free from noise and distortion. Its advanced signal quality monitor can display the multipath and noise levels of the incoming RF signal to help fine tune antenna placement for optimal reception. Dedicated PRESET and TUNING knobs enable easy radio operation. The FM tuner includes Radio Data System (RDS) support, allowing it to display optional information sent by radio stations such as the station’s name and call letters as well as the name of the artist and song being played. It features 20 presets for each radio band as well as a remote AM antenna.