Ortofon - A Century of Accuracy in Sound: 100th Anniversary Book

Equipment Book
Price Now $59.00
Was
Was
Save $0.00 (0%)
Questions and Answers
Availability: In Stock
This item is in stock and ready to ship. Depending on the time of day when you place your order, it will ship same day or next business day. 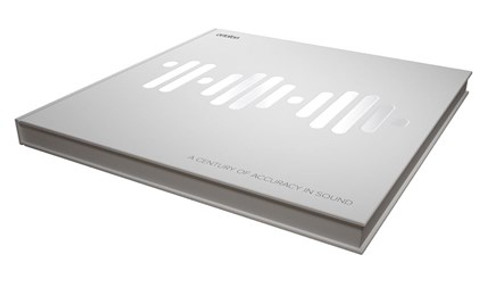 Ortofon - A Century of Accuracy in Sound: 100th Anniversary Book

Be alerted when Ortofon - A Century of Accuracy in Sound: 100th Anniversary Book is back in stock

This book reveals the remarkable history of a company that for 100 years has always been in the business of acoustics. Indeed, for that timespan, Denmark itself, has been recognized as the land of acoustics, with many companies designing innovative products. The country retains that reputation today.

Ortofon has played a significant role in creating a rich heritage for Danish acoustics. As you will discover in the book, the list of Ortofon's famous and groundbreaking products is a long one. Music historian Kevin Howlett has written this history of 100 years of Ortofon based on a firm foundation of exhaustive research in various archives and in-depth interviews with past and present employees from the 1970s until now.

Throughout the book, there are overviews of Golden Ear records released during the last seven decades. Ortofon's origination of the phrase "golden ear" is described in detail in Chapter Three. In brief, when developing new models of cartridges, Ortofon engineers have always relied on particular albums to evaluate the potential of prototypes.

Ortofon's Chief Officer of Acoustics and Technology, Leif Johannsen, and the author, Kevin Howlett, have made their Golden Ear choices based not only on the musical excellence and significance of each LP, but also the high quality of its sound. In addition to many well-known audiophile classics, there are some esoteric personal favorites in their selection.