Equipment Cable
Price Now $180.00
Was $300.00
Was
Save $120.00 (40%)
Questions and Answers
Availability: In Stock
This item is in stock and ready to ship. Depending on the time of day when you place your order, it will ship same day or next business day. 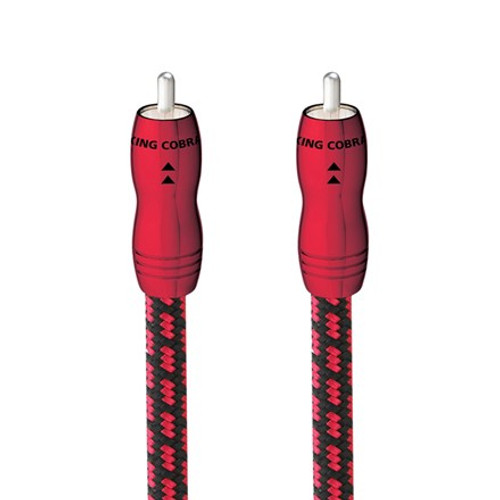 AudioQuest's King Cobra interconnects are one of the greatest values in audio cables today, an affordable cable built to a standard far greater than the very reasonable price might suggest. King Cobra's unique combination of ingredients creates a cable that easily outperforms cables that are vastly more expensive. One look at King Cobra's cross section and the differences between King Cobra and traditional audio cables becomes immediately apparent. King Cobra uses AudioQuest's best copper, PSC+, and its performance is through the roof!

King Cobra's PSC+ conductors are exceptionally pure solid-core copper conductors treated with Audioquest's proprietary Perfect Surface Plus process which eliminates high frequency artifacts and distortions for a clearer view into any recording. King Cobra's solid-core conductors improve conductivity and eliminate the distortions that plague stranded cables, giving King Cobra a big, powerful and coherent presentation. The Triple Balanced Geometry, which uses a single PSC+ conductor for the positive and two for the negative, lowering the noise floor and improving the ground plane.

Each PSC+ conductor is then inserted into its own air tube; air tubes minimize contact between the conductor and the insulation improving conductivity, which gives King Cobra bigger, airier and more transparent performance. The positive conductor is then welded –using 8,000Amps- to the RCA connector. This means that from tip to tip, King Cobra has no breaks in its signal path. The positive conductor is literally one piece of copper from tip to tip. This welding process offers a smoothness and transparency for the audio signal that no soldered connection can possibly achieve.

All this attention to detail would be for naught if King Cobra wasn't shielded, so King Cobra has a foil shield & drain wire which keeps RFI & EMI from distorting the delicate signals contained within.

AudioQuest cables are legendary in audiophile circles for their neutrality and resolution. For 28 years, AudioQuest has worked tirelessly to achieve sonic neutrality in all their cables, regardless of price. Ensuring that music flows unchanged and uncolored requires removing the myriad distortions that occur when a signal flows through a cable. To accomplish this, AudioQuest bypassed conventional cable design and focused their efforts on both the physical properties and sonic characteristics of the conductors and connectors, as well as every other material used in the creation of their cables.