Equipment Disc Player
Price Now $6,000.00
Was
Was
Save $0.00 (0%)
This product is not eligible for further discounts.
Questions and Answers
Availability: In Stock
This item is in stock and ready to ship. Depending on the time of day when you place your order, it will ship same day or next business day. 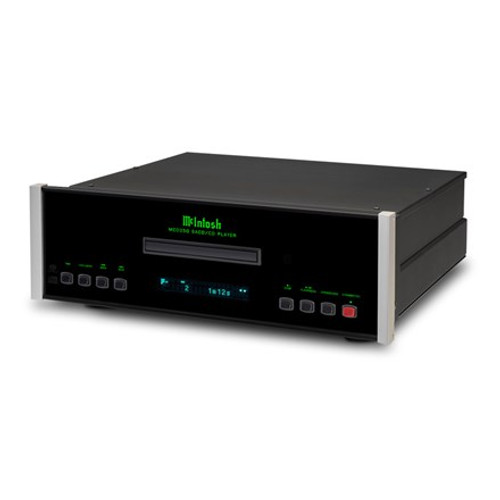 The McIntosh MCD350 SACD/CD player cuts right to the chase: This USA-built audio component is all about purity. Devoid of any volume control, headphone amplifier, or digital inputs, MCD350 hones in on reproducing SACDs and CDs with crystalline clarity, gripping dynamics, meticulous detail, and edge-of-your-seat realism. It is intended for the music lover who prizes unadulterated sound, streamlined sonic experiences, and the benefits of untainted signal paths. Featuring a balanced two-channel, 32-bit/192kHz DAC and 2x disc read speed that allows disc data to be stored in a buffer memory for optimal error correction and tracking, MCD350 turns physical media into lifelike entities in which the human scale of the music comes alive and enhances our connections to its emotional, instrumental, and vocal magnetism.

Touting the famed McIntosh pedigree, MCD350 is engineered to the nth degree. It excels by way of a twin-laser optical pickup with a single objective lens that extracts information with supreme precision. The separate laser units are devoted to either SACD and CD playback, making MCD350 a double threat no matter which format you select. A rigid, aluminum die-cast tray provides unshakeable stability, vibration-resistant control, and quiet operation. Balanced and unbalanced fixed analog outputs, a coaxial output, and optical output – all of which (save the optical) are plated in gold for supreme conductivity – complement a large, extra-sturdy, confidence-reassuring, partial-polished stainless-steel chassis. McIntosh's hallmark looks – a black glass front panel with an illuminated logo and aluminum end caps – complete a design steeped in perfectionism and made to deliver years upon years of musical memories. 100% Music Direct Guaranteed.