Equipment Disc Player
Price Now $5,500.00
Was
Was
Save $0.00 (0%)
This product is not eligible for further discounts.
Questions and Answers
Availability: In Stock
This item is in stock and ready to ship. Depending on the time of day when you place your order, it will ship same day or next business day. 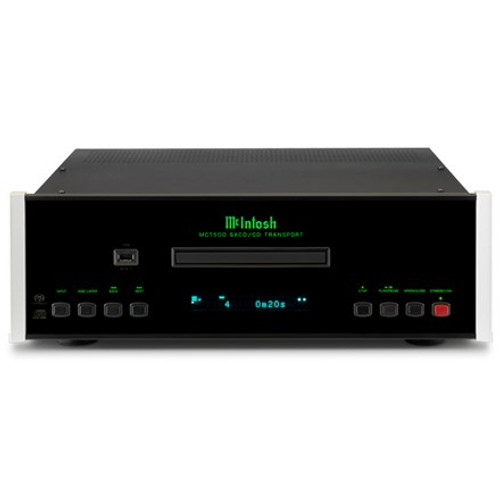 Designed to be paired with an external component with digital inputs (like an external DAC), and tailored with an MCT output for matching with other McIntosh products with the company's proprietary MCT input to play back high-resolution audio, the McIntosh MCT500 SACD/CD transport offers state-of-the-art performance from nearly every kind of audio disc manufactured as well as up to DSD128 files on flash drives via its front-panel USB input. A quartet of balanced, coaxial, optical, and MCT outputs allow MCT500 to be effortlessly integrated into virtually any type of system. A twin-laser pickup, two-times reading speed, advanced digital servo, and a high-end die-cast-aluminum CD tray ensure optimal reading, tracking, accuracy, and quickness. MCT500 also boasts a linear power supply with a special R-core power transformer, as well as power control and data ports for the simplest-possible operation.

Most importantly, the super-quiet and hyper-accurate MCT500 produces beguiling sound. You'll both discover and rediscover all the information on your discs. Everything from the thwack of a snare drum to the liberating crunch of a power chord to the brassy spunk of a saxophone will take on realistic proportions. You won't need to imagine what live music sounds like; you'll experience it. And you'll do it all in style, as MCT500 has McIntosh's signature looks, including an illuminated black glass faceplate and stainless-steel super-mirror-finish chassis. This is how digital was always supposed to sound and feel. 100% Music Direct Guaranteed.

Bountiful Playback Options and Proprietary MCT Connectivity for High-Resolution Audio
For SACD playback, MCT500's proprietary MCT output needs to be connected (via the included cable) to a McIntosh product with an MCT input. Such products include the D1100, C52, C2600, C47 and D150 preamplifiers, MA9000, MA8900, MA7200 or MA5300 integrated amplifiers, or MAC7200 receiver. When MCT500 is connected to one of these devices, a secure digital connection is created, allowing for the playback of the high-definition audio found on SACDs. Regular CDs can also be played over the MCT connection. All common disc types can be played on MCT500, including SACD, CD, CD-R/RW and DVD-R. In addition to store bought CDs and SACDs, popular file formats such as AAC, AIFF, ALAC, DSD (up to DSD128), FLAC, MP3, WAV (up to 24-bit/192kHz) and WMA can be played from user-generated CD or DVD Data Discs and USB flash drives.