Equipment Phono Preamps
Price Now $5,399.00
Was $6,695.00
Was
Save $1296.00 (19%)
Questions and Answers
Condition: Open Box
Availability: In Stock
This item is in stock and ready to ship. Depending on the time of day when you place your order, it will ship same day or next business day. 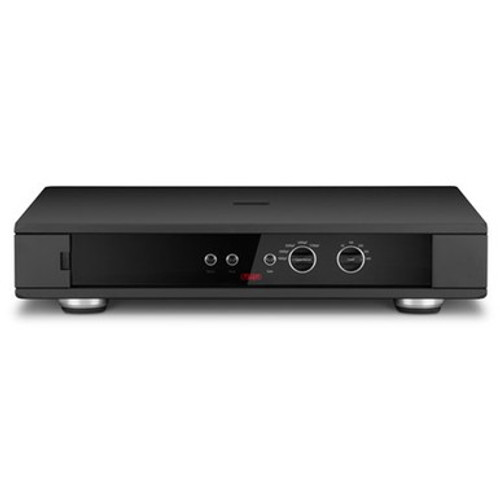 Versatility might be all the rage in the modern age, but rarer — and in certain applications, more valuable — is the ability to maintain an unyielding focus on a single pursuit and accomplish that one goal to the fullest degree. Rega designed the Aura Reference MC phono preamplifier according to such principles. In short, the three-stage all-symmetrical design stands as the finest-, most natural- and revealing-sounding electronics component in the British company's vaunted 45-year-and-counting history. The no-compromise Aura exists for the vinyl connoisseur who puts a premium on the level of detail, finesse, information, richness, tonality, and texture that can be wrought from analog playback. It also represents an exercise in maximum minimalism — ridding any and all extraneous functions, tunable filters, and circuitry in order to preserve the clearest, cleanest path for the signal. And it zeroes in on everything you require for extraordinary MC sonics — including capacitance and load settings as well as gain, mute, and mono switching all controlled with high-quality relays. From the balanced (and unbalanced) outputs to the interior architecture, Rega took no shortcuts in designing this musical instrument to the nth degree.

Tasked with driving the passive high-frequency part of the RIAA equalization stage, Aura's first stage is a symmetrical, complementary Class A amplifier that uses parallel-connected Linear Systems ultra-low noise FET (Field Effect Transistor) transistors configured as a symmetrical compound pair input stage. FETs ensure no bias current flows in the cartridge coil so as not to upset the cartridge's delicate magnetic geometry. The input configuration also alleviates the need for any sonically degrading coupling components between the cartridge output and input-stage FETs. Here, the complementary ultra-low noise FET transistors are carefully graded and matched for optimum performance. Serving as the active amplifier in the low-frequency part of the RIAA equalization stage, Aura's second stage is a symmetrical, Class A differential amplifier with a common base driver stage. Aura's third stage inverts the signal to provide the balanced output along with the output of the second stage; the third stage uses the same circuit topology as that of the second stage.

Touting a voltage 60% higher than those normally found in phono preamplifiers to net maximum headroom, Aura's symmetrical, discrete tracking power supply employs fast diodes and a low-noise voltage reference. Each stage has its own localized power supply and LED-referenced current generators. In addition, high-end polypropylene capacitors are used throughout the signal path while 1%-tolerance polypropylene capacitors can be found in the RIAA EQ stages. Audiophile capacitors are used in the rest of the circuit. Again, no stone has been left unturned. Aura sets out to — and more than achieves — establish a new reference. Most importantly, it will change how you experience vinyl LPs in ways on which nobody can put a price. 100% Music Direct Guaranteed.

"There may be plenty of significantly more expensive step-up-plus-EQ devices than an Aura, but this low-output phono stage simply makes good cost-effective sense against the current cost of moving-coil cartridges."
—Paul Messenger, Hi-Fi+, 2019 Phonostage of the Year Award