Equipment Phono Preamps
Price Now $3,695.00
Was $4,700.00
Was
Save $1005.00 (21%)
Questions and Answers
Condition: Open Box
Availability: In Stock
This item is in stock and ready to ship. Depending on the time of day when you place your order, it will ship same day or next business day. 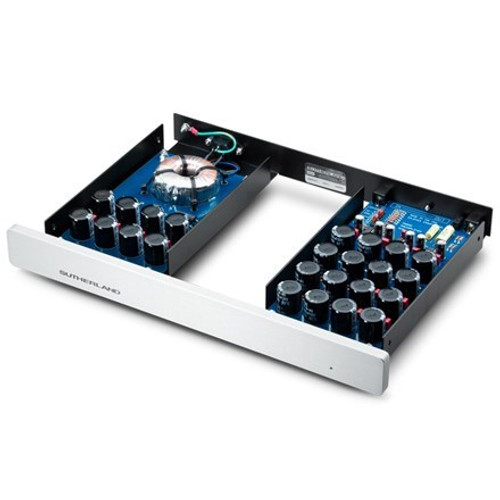 Elevated to rarified heights by a linear power supply that adds authority, control, and purity, the Sutherland Duo LPS MM/MC phono preamplifier is a cross between the company's 20/20 and flagship PhonoBlock models. In practice, the two-chassis Duo LPS serves as a knockout analog instrument in its price class – a U.S.A.-made component that borrows much of its design from a cost-no-object product and delivers a level of musicality you will cherish for many years to come, if not forever. Detailed, natural, dimensional, accurate, insightful: A few of the many positive sonic traits that will spring to mind once Duo LPS enters your system and begins to help turn the information embedded in vinyl grooves into reach-out-and-touch-it aural experiences. Duo LPS provides any listener fortunate to own it with superlative performance via perfectionist-minded focus and stunningly quiet operation. It all circles back to founder Ron Sutherland's emphasis on smart engineering and proven physics.

Duo LPS' two-box layout automatically eliminates crosstalk, as each chassis gets its own circuit as well as its own IEC power inlet.There's also more room for the internal parts, which benefits overall reliability. Each channel also features identical electrical and mechanical environments. Duo LPS mitigates circuit-board dielectric properties in the same fashion as PhonoBlock. At twice the industry standard, each 1/8-inch-thick, double-sided FR-4 fiberglass board provides both needed absorption and extreme rigidity for component mounting. Once again, Sutherland refuses to compromise on any attribute. Just lift the cover and see.

How and Why Duo Skirts Dielectric Distress
Anytime two conductors are at a different voltage potential, an electric field is generated between them. The dielectric (the insulation between conductors) within that field becomes involved in charge storage. If not carefully considered, that extra charge storage can time smear details of a musical signal. Circuit board material is a dielectric. On normal double-sided construction, copper conductors are located on each side of the board. Unintentionally, a new capacitor is introduced into the circuit, formed by top surface copper, bottom surface copper, and the circuit board dielectric sandwiched between the two. It is not the quality of capacitor we want to have in a high-end signal path. Some manufacturers make the situation worse by going to multi-layer boards in the analog audio sections. Instead of two layers of copper, there are four or more. Even worse, the dielectric between layers is much thinner. The undesired capacitive effect is inversely proportional to thickness. At best, some manufacturers make small improvements by using exotic board material. Duo addresses the issue of circuit board dielectric by doubling the thickness of an FR4 fiberglass circuit board. That choice alone reduces electric field strength by one-half. Additionally, the area of copper interacting with board dielectric gets reduced in critical regions. Signal lines are kept narrow. Power lines are extremely wide. The result: refined performance. Good solid advantages based up the application of good solid physics.

Inside the Linear Power Supply
With the linear power supply, the power transformer is toroidal for minimal radiated magnetic field, which itself gets further reduced by connecting the primary windings in series rather than parallel. As a result, the transformer flux density is reduced to half of its normal value. The transformer's AC output is full wave rectified, current limited, and applied to a first stage shunt regulator—an approach that gives the first stage of voltage regulation and smooths the current waveform drawn thru the transformer. The usual current spikes become much more sinusoidal in shape—and are not injected back into the power line nor project a radiated noise field. The first cut at regulation is followed by several stages of R-C pi filtering, a passive approach proven in other Sutherland designs. Another DC shunt regulator is applied near the audio circuitry.

From Ron Sutherland:
"In the two-chassis designed Duo, there is the obvious elimination of crosstalk, as it's so much easier to design a mono circuit than one for stereo. Everything is simpler. There is more room to optimize the layout, which ends up improving reliability. Both channels here see identical electrical and mechanical environments, so there are less compromises in performance. Sometimes it actually costs more to optimize the performance of a single-chassis unit than it does to build another chassis and go with a mono circuit design."