Equipment Speakers
Price Now $3,399.00
Was
Was
Save $0.00 (0%)
Questions and Answers
Availability: In Stock
This item is in stock and ready to ship. Depending on the time of day when you place your order, it will ship same day or next business day. 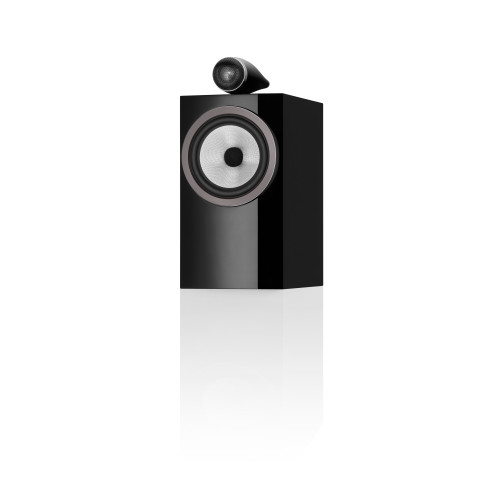 Reproducing music with heightened degrees of clarity, definition, and detail, the Bowers & Wilkins 705 S3 bookshelf loudspeaker prizes the art of nuance, texture, and tonality. Among the most revered stand-mount models on the market, 705 S3 plays with immaculate coherency, crispness, and control – aspects that remove the divisions between you and the artist. Inspired by recording studios, designed for your room, tuned through thousands of hours of listening, 705 S3 incorporates critical developments originally devised for Bowers & Wilkins’ flagship 800 Diamond Series.

Speaking of, the most striking visual aspect of the two-way 705 S3 is the Tweeter-on-Top architecture that now takes the shape of a more elongated form for enhanced high-frequency performance. Milled from a solid block of aluminum, this housing design creates an acoustically optimized casing – one both exceptionally inert and resistant to resonances. As for the tweeter itself: The one-inch Decoupled Carbon Dome type raises the breakup threshold to 47kHz for pinpoint imaging and accuracy. And compared to its predecessor, 705 S3 sports a slimmer cabinet and curved front section that features a protruding driver mounted in a distinct pod. This combination reduces baffling effects and delivers richer tonal presence. Further upgrades to the motors, crossovers, chassis, and terminal trays complement a 6.5-inch Continuum cone midrange driver and rear-firing Flowport that help account for open, neutral mids and smooth, deep bass.

Finished with high-grade lacquer, the 16.3 x 7.6 x 13.3-inch (HWD) 705 S3 invites you to hear instruments you may never have sensed before, depth you've never previously experienced, and soundstages that take you right to the event. There are good reasons why Bowers & Wilkins has remained one of "the" names in high-end audio for nearly 50 years. Backed by a five-year manufacturer warranty, 705 S3 is one of them.

"The new Bowers & Wilkins 705 S3 has a predominantly neutral sonic signature and treads a clever line between sounding detailed and being clinical. It has a lovely treble quality and fine instrumental separation in the midband. Soundstaging is a really strong point, too."
—Paul Sechi, StereoNET, Applause Award

"[The] new 705 is an incredibly articulate, clear, and focused loudspeaker... The 705's decoupled tweeter proved more composed and less prone to ringing or sibilance when pushed. As a result, detail is terrific, as is articulation and inflection, from the upper midrange on through to the highest of highs."
—Andrew Robinson, The Recovering Audiophile (YouTube)

"The 705 S3 captures the musical essence and sonic prowess of its superb big brother... There are never surprises at B&W launch events, only confirmations of what one expects — extensive R&D yielding technical advances, which are integrated gracefully wherever possible and which turn out to be sonically meaningful."
—Alan Taffel, The Absolute Sound

"The [earlier] 705 S2 are wonderful speakers and reproduced a solid image, powerful piano notes with full bass. Vocals were clear, well formed, perhaps with an occasional touch of sibilance. When we switched to the 705 S3s, the imaging was [sharpened], and better defined with a better sense of space, a subtle but noticeable difference."
—Brian Kahn, Audioholics

The story of Bowers & Wilkins starts with one man—John Bowers. His drive and passion are written into the DNA of the company he founded more than 50 years ago. Bowers dreamed of producing the perfect loudspeaker, capable of delivering recorded sound that is utterly faithful to the actual musical performance and to the artist's original intent. His obsessive pursuit of perfection and steadfast refusal to accept anything but the very best continues to shape everything the company does. "Good enough" simply isn't good enough for Bowers & Wilkins. For decades, Bowers & Wilkins loudspeakers have been the trusted choice of studio professionals and recording artists around the globe. B&W speakers are as fundamental to many artists' creative process as their preferred microphone or favorite guitar.