Equipment Speakers
Price Now $1,799.00
Was
Was
Save $0.00 (0%)
Questions and Answers
Availability: In Stock
This item is in stock and ready to ship. Depending on the time of day when you place your order, it will ship same day or next business day. 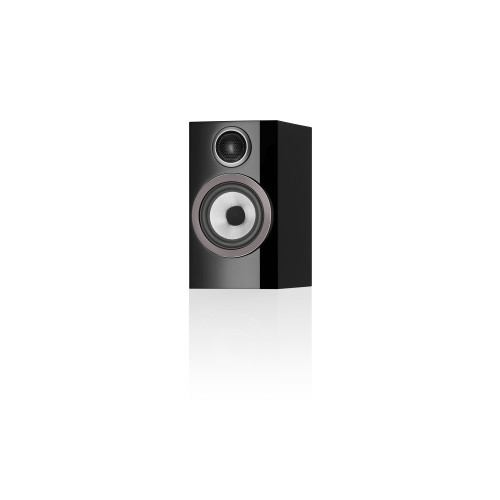 Looking for an audiophile bookshelf loudspeaker that fits in tight spaces and performs like one that has more room to operate? Bowers & Wilkins 707 S3 checks the boxes. Less than seven inches wide, this two-way vented-box model makes itself at home in rooms where space is at a premium while providing sensational fidelity marked by openness and naturalism. Voice-matched to every other speaker in the company’s 700 Series, 707 S3 also serves as a righteous choice for rear-channel placement in a surround system.

Visually, 707 S3 looks the part with a luxurious finish conveying simplicity and elegance. But even the aesthetics pale next to its sound — tuned via thousands of hours of listening and focused on acoustic exactness. The latest iteration of a model that TONEAudio said “defied its price tag,” Hi-Fi Choice noted as “an outstanding value for the money,” and The Secrets of Home Theater and High Fidelity credited for its “ability to image and project a believable soundstage,  707 S3 is pure Bowers & Wilkins through and through. Versatile placement options and a five-year manufacturer warranty seal the deal.

"[They] do what the much-more-expensive premium two-way monitors do, and that's sounding big and open in a fairly large room. This is just a 5″ woofer and a carbon dome tweeter, nothing hiding in the box other than solid engineering."
—Marc Phillips, Part-Time Audiophile

The story of Bowers & Wilkins starts with one man—John Bowers. His drive and passion are written into the DNA of the company he founded more than 50 years ago. Bowers dreamed of producing the perfect loudspeaker, capable of delivering recorded sound that is utterly faithful to the actual musical performance and to the artist's original intent. His obsessive pursuit of perfection and steadfast refusal to accept anything but the very best continues to shape everything the company does. "Good enough" simply isn't good enough for Bowers & Wilkins. For decades, Bowers & Wilkins loudspeakers have been the trusted choice of studio professionals and recording artists around the globe. B&W speakers are as fundamental to many artists' creative process as their preferred microphone or favorite guitar.