Equipment Speakers
Price Now $4,000.00
Was
Was
Save $0.00 (0%)
This product is not eligible for further discounts.
Questions and Answers
Availability: In Stock
This item is in stock and ready to ship. Depending on the time of day when you place your order, it will ship same day or next business day. 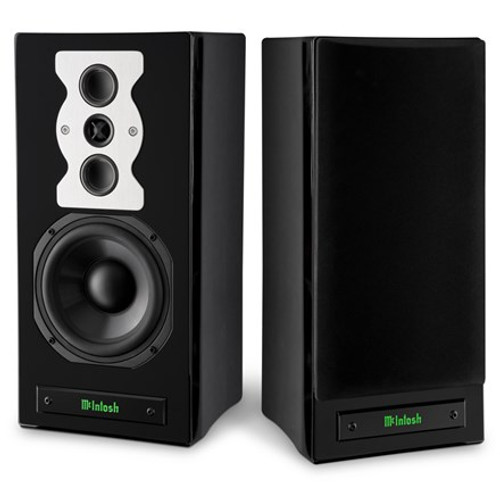 The myth of getting three-dimensional soundstaging and full-spectrum performance from bookshelf loudspeakers becomes a reality with the McIntosh XR50. Producing vastly larger soundfields, greater dynamics, and more powerful responsiveness than their compact size would indicate, XR50 distributes power across all the drivers – a three-quarter-inch titanium dome tweeter and pair of two-inch inverted titanium dome midrange drivers, all comprised of neodymium-iron-boron alloy with the highest flux density per unit of volume – to generate increased power handling and dramatically reduced distortion. Responsible for what can only be described as unreal bass, XR50's woofer system is even more impressive. Each six-inch woofer features patented LD/HP technology, an advancement that significantly reduces distortion, increases efficiency, and improves control. You'll hear the first several octaves like never before, and enjoy sublime accuracy and transient response.

A rear vent through the magnetic assembly leads to reference-level heat dissipation, while the die-cast basket is arrayed in a fashion that prevents displacement noise. A rigid, four-layer copper voice coil in the polypropylene cone serves as a near-perfect air piston. While XR50 is not cheap, getting such woofer technology – let alone performance – in a speaker of this size borders on miraculous.

Able to play back recordings with their full dynamic range and with stunning clarity, XR50 delivers superior imaging and stellar precision, bringing to life the crucial details, textures, and tones that make music feel emotional, engaging, and lifelike. Designed to be driven without strain by 300W amplifiers, XR50 can be driven by units with 75W ratings. (Please note XR50 has an 81dB sensitivity rating.) Its non-parallel internal sides further contribute to its extraordinary capabilities as either a dedicated two-channel speaker or first-rate surround speaker. McIntosh's custom gold-plated binding posts, a front-panel logo that can illuminate via the Power Control feature on other McIntosh components, and a five-year manufacturer warranty elevate XR50 into its own stratosphere. Music Direct Money-Back Guaranteed.