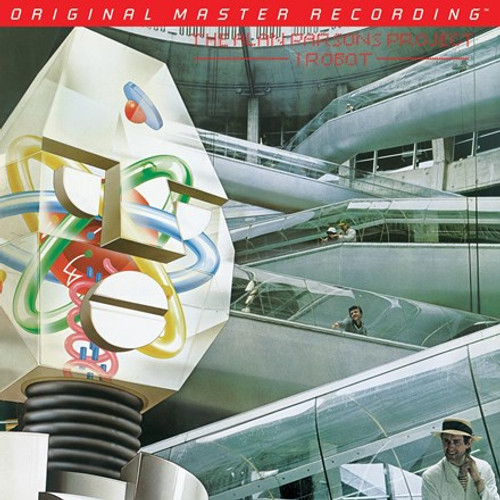 A Demonstration Disc for the Ages: System-Testing Disc Plays with Immaculate Highs and Lows, Supreme Spaciousness, and See-Through Transparency

Audiophiles needn't any introduction to the Alan Parsons Project's I Robot. Engineered by Parsons after he performed the same duties on Pink Floyd's Dark Side of the Moon, the 1977 record reigns as a disc whose taut bass, crisp highs, clean production, and seemingly limitless dynamic range are matched only by the sensational prog-rock fare helmed by the keyboardist and creative partner Eric Woolfson. Not surprisingly, it's been issued myriad times. Can it be improved? Relish Mobile Fidelity's stupendous-sounding hybrid SACD and the question becomes irrelevant.

Mastered from the original master tapes, this numbered-edition reissue of I Robot boasts immaculate highs and lows, generous spaciousness, and see-through transparency that takes you into the studio with Parsons and Woolfson at Abbey Road. Mobile Fidelity engineers approached this SACD with the intention of demonstrating the full-range capabilities of the world's best stereo systems. Put simply, there's more music, more information, more detail, more nuance, more everything. Savor reference-grade soundstages, immersive smoothness, sought-after instrumental separation, three-dimensional imaging, and consummate tonal balances. Able to be played back at high volumes without compromise or fatigue, this is a demonstration disc for the ages.

Inspired by and loosely based around the Isaac Asimov stories of the same name, I Robot delves into themes of artificial intelligence and technological dominance that make the record increasingly relevant in the 21st century. Indeed, Parsons and Woolfson's pinnacle creation dovetailed with the ascendency of Star Wars, which itself is experiencing a rebirth in an age of self-driving cars, smart devices, and mindless automation. Lyrically, songs such as "The Voice" call into question human behavior – and their relationship to increasing robotic supremacy – in everyday life. Sonically, Parsons and Woolfson reflect the associated paranoia, dichotomy, and transformation via shifting sci-fi arrangements steeped in drama and moodiness.

I Robot's absorbing tunes also continue to fascinate due to their perfectionism and innovation. Borrowing from Pink Floyd's strategies, Parsons and Woolfson utilize a looped sequence on the title track to create new downbeats. "Some Other Time" employs two different lead vocalists and yet gives the illusion only one is involved. Captivating strings, a piccolo trumpet, and bona fide pipe organ grace "Don't Let It Show." The origins of "Nucleus" stem from a unique analog keyboard concoction dubbed "the Projectron," devised by Parsons and electronic engineer Keith Johnson. Andrew Powell's orchestral and choral arrangements top it all off, with "Total Eclipse" arriving as an aptly frightening track that presages the climactic "Genesis Ch. 1 V. 32."

Does man or machine win in the end? Decide as you get lost in the music presented on Mobile Fidelity's SACD.