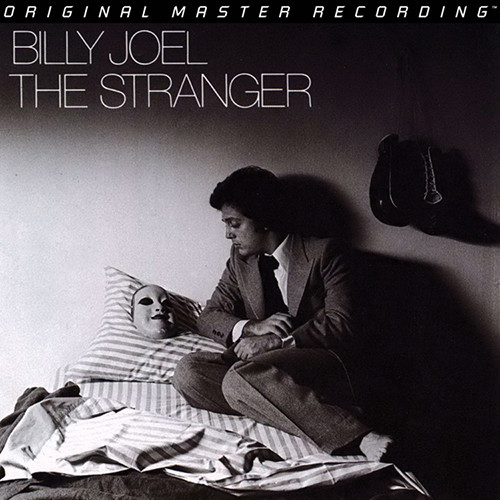 Ranked #67 on Rolling Stone's 500 Greatest Albums of All Time: Billy Joel’s Breakthrough Includes “Movin’ Out (Anthony’s Song),” “Just the Way You Are,” “Only the Good Die Young,” “She’s Always a Woman”

Billy Joel entered 1977 with a great track record but in need of a breakthrough. Pairing with producer Phil Ramone (Carly Simon, Simon & Garfunkel), who developed the requisite ingredients missing from Joel’s formula, the singer-songwriter became a household name and chart-topping success courtesy of The Stranger. Ranked #67 on Rolling Stone’s list of the 500 Greatest Albums of All Time and certified ten-times platinum, Joel’s artistic and commercial smash remains a pop-rock benchmark.

Mastered from the original master tapes, Mobile Fidelity's numbered-edition hybrid SACD emphasizes the crucial touches and insightful techniques Ramone brought to a batch of material that ranks among Joel’s most clever, catchy, and sagacious. Whereas a handful of Joel’s preceding efforts feature a near-flawless mix of melodic arrangements and poignant lyrics, the aspects he sought in order to graduate into a more serious artist arrive here via Ramone’s more muscular, fleshed-out, and rock-enabling production. The streamlined approach strips back the sweeping developments heard on Piano Man and Turnstiles, allowing the vocalist’s bittersweet yearning, rollicking 88 notes, and working-class conviction to emanate with full-bodied detail, vivid color, and grand-scale dynamics.

A Grammy winner for both Record and Song of the Year, “Just the Way You Are” epitomizes Joel’s balladic reach, his ability to transfer wistful sentiments and lovelorn emotions. He also flashes a mean streak. The animated “Only the Good Die Young” bounces and hops to an updated classic-R&B rhythm and, underneath its beauty, “She’s Always A Woman” hints at trouble underfoot. And then there’s the New York-centric, character-rich poetry of the vignettes.

Akin to many of his influences, Joel nails the grit, personality, specificity, descriptiveness, and behavior of protagonists that populate “Movin’ Out (Anthony’s Song)” and “Scenes From an Italian Diner,” each equally at home on The Stranger as well as on a Broadway play or on a golden-era Hollywood film soundtrack. Unsurprisingly, just months after the record's original release, Joel was no longer a stranger to any of the music-loving public. He would never look back.

1. Movin’ Out (Anthony’s Song) 2. The Stranger 3. Just the Way You Are 4. Scenes From an Italian Restaurant 5. Vienna 6. Only the Good Die Young 7. She’s Always a Woman 8. Get It Right the First Time 9. Everybody Has a Dream/The Stranger (Reprise)
Related Videos
Review: MoFi Electronics' Turntable Trio - UltraDeck, StudioDeck and Foundation
Customers Also Bought