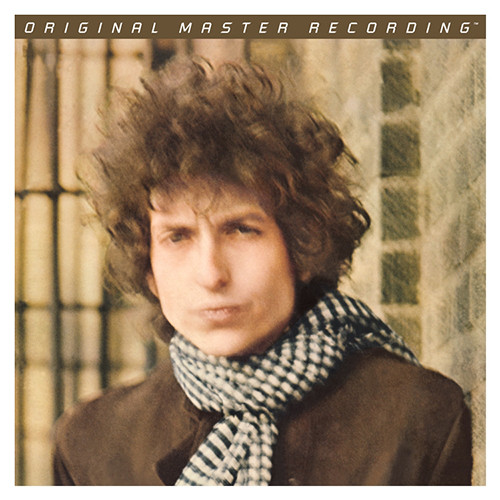 Blonde on Blonde: A double album that transcends time, defies space, suspends reality, and looks through the human soul and tells the listener characteristics about themselves they didn’t know. Professor Sean Wilentz, historian-in-residence for Bob Dylan’s website, comes as close to summing up its brilliance in his superb Bob Dylan In America as any who’ve tried: “The songs are rich meditations on desire, frailty, promises, boredom, hurt, envy, connections, missed connections, paranoia, and transcendent beauty—in short, the lures and snare of love, stock themes of rock and pop music, but written with a powerful literary imagination and played out in a pop netherworld.” No lie.

Renowned for what the Bard deemed “that thin, that wild mercury sound,” the album’s famed aural character lives and breathes on Mobile Fidelity's hybrid SACD, which reveals buried information and delivers lifelike presentation of the studio sessions. Indeed, forever prized for a unique sound that cultural critic Greil Marcus tagged “the most glamorous record imaginable; listening you [can] see the checkered jester’s suit Dylan had worn on stage for the nine previous, furious months,” Blonde on Blonde is to music, production, prose, and performance as what hydrogen is to water.

The secret to its inimitable aural character partially stems from Dylan’s request in Nashville to producer Bob Johnston to remove the baffles from the studio room, allowing the musicians to interact as well as the music to assume a more organic quality that drifts from one microphone to another. Mobile Fidelity’s SACD captures this ensemble ambience, with echoes, resonation, and some of the most natural timbres you’ll ever hear.

The story of Blonde on Blonde is almost as compelling as the music within. Dylan, frustrated with how initial attempts fared in New York, relocating to Tennessee and pairing with Nashville’s top session players as well as members of what would become The Band, feverishly chasing perfectionism while also arriving at an on-the-fly feel that remains a reference point for recorded music. The Bard sweated over lyrics, demanded his band get the exact sounds he heard in his head, and limited most takes to a handful at most.A majority of songs were recorded long after midnight, the post-A.M. vibe reflected in the nocturnal aura, woozy optimism, inversion of intervals, and spiritual soulfulness of the playing.

As for the tunes? Chapters of books and lengthy theses are dedicated to the sheer conscious-altering power, mythical weight, character cast, and convention-obscuring magnetism of the lyrics—to say nothing of the sophisticated albeit pure playing within, as arrangements touch upon gospel, R&B, pop, traditional and contemporary blues, vaudeville, folk, and more. Then there’s Dylan's inventive phrasing, his manipulation of pitch and locution, helping the narratives to take on epic, inchoate, and cryptic meanings that continue to be deciphered to this day. Punch lines occur as frequently as romantic declarations, all delivered with salient references, traditional parallels, and elusive interpretations on par with those of Shakespeare. “Essential” doesn’t even begin to cover the genius of this record.

1. Rainy Day Women #12 & 35
2. Pledging My Time
3. Visions of Johanna
4. One of Must Know (Sooner or Later)
5. I Want You
6. Stuck Inside of Mobile With the Memphis Blues Again
7. Leopard-Skin Pill-Box Hat
8. Just Like a Woman
9. Most Likely You Go Your Way (And I’ll Go Mine)
10. Temporary Like Achilles
11. Absolutely Sweet Marie
12. 4th Time Around
13. Obviously 5 Believers
14. Sad Eyed Lady of the Lowlands
Related Videos
Review: MoFi Electronics' Turntable Trio - UltraDeck, StudioDeck and Foundation
Customers Also Bought