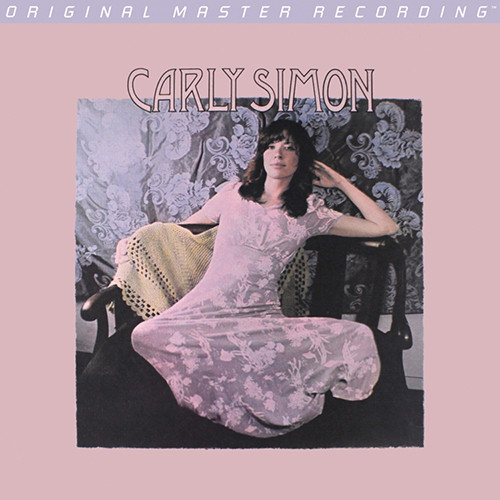 Mastered from the Original Master Tapes: Mobile Fidelity's Hybrid SACD Boasts Stellar Microdynamics, Vocal Intricacies, and Lifelike Imaging
Carly Simon’s exceptional debut remains one for the books. Immediately recognizing her potential, Elektra Records founder Jac Holzman signed and paired her with legendary producer Eddie Kramer. The pair’s chemistry resulted in a remarkable record that birthed an instant Top Ten hit, “That’s the Way I’ve Always Heard It Should Be,” a potent statement about marriage that, in the era, doubled as a feminist statement. Simon’s star-making self-titled album went on to garner critical acclaim and two Grammy nominations, including an award for Best New Artist.
Mastered from the original master tapes, Mobile Fidelity’s numbered-edition hybrid SACD brings audiophile-caliber warmth, closeness, and realism to the exquisitely crafted music. Simon’s even-keeled voice assumes a clearer, more intimate quality. Instruments come into view via well-defined imaging and accurate tonalities. Balances are sharper than on prior editions, and the emotionalism enhanced. Soundstages, too, are broader and deeper, benefitting from a meticulous mastering process that opens up the dynamics and lets everything breathe.
For the first time, Kramer’s production gets the opportunity to truly shine. Boasting stellar sonics and gorgeous subtleties, this SACD is tailor-made for relaxing listening sessions with a glass of wine at arm’s reach. It also places Simon’s lyrical arc about moving from living a carefree youth to entering adulthood—and the doubts, curiosities, heartbreaks, vulnerabilities, and anticipations that accompany the transition—in greater relief. Melodic counterpoints provided by the scored orchestrations, steel guitar accents, and hybrid pop-jazz progressions further amplify Simon’s emotional reach.
While Simon achieved greater commercial success with successive releases, rarely did she again sing with the kind of nuanced character, understated poignancy, and outstanding control present here. Before evolving into one of rock’s premier singer-songwriters, Simon used her eponymous debut as a standout platform to showcase the art of vocal intricacies and phrasing. Coupled with the record’s nimble arrangements and narrative palette, the performances elevate Carly Simon to a level on par with the artist’s breakout No Secrets and Hotcakes albums.
Simon’s instinct for introspection can’t be denied. She approaches the material in strikingly personal fashion. A majority of songs concern a young woman’s reflections on development, expectations, disappointment, individuality, and romance. Chronicling human changes and growth, the singer explores the peaks and valleys between highs and lows with candid eloquence and bittersweet beauty that foreshadow what’s to come. Whether on the balladic “The Best Thing,” folk-laden “Reunions,” or harmony-drenched “The Love’s Still Growing,” Simon touches hearts and reaches into souls with her expressive feeling and aching melodies.
“The wider soundstage on these discs brings clarity to the background and more vitality to the instruments. The backing players’ personalities stand out more, and Carly’s stunning, expressive contralto voice sounds even more present.”
—The Absolute Sound
1. That’s the Way I’ve Always Heard It Should Be
2. Alone
3. One More Time
4. The Best Thing
5. Just a Sinner
6. Dan, My Fling
7. Another Door
8. Reunions
9. Rolling Down the Hills
10. The Love’s Still Growing
Related Videos
Review: MoFi Electronics' Turntable Trio - UltraDeck, StudioDeck and Foundation
Customers Also Bought