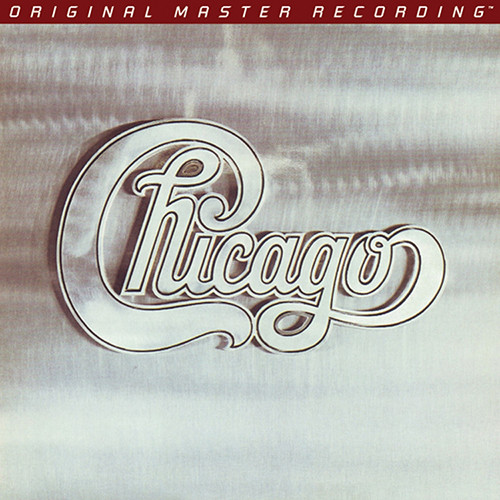 Classical Elements and Advanced Progressive Changes Reveal Chicago at its Peak: Chicago II Includes the Hits "25 Or 6 To 4" and "Make Me Smile"

Chicago shortened its name on its second album but altered little else. Improving upon the creative synthesis shown on its debut, the ensemble ups the ante for pop, rock, and jazz fusion on its 1970 sophomore set, introducing classical signatures as well as a penchant to delve even deeper into unchartered waters. Ambitious arrangements and brazen interplay remain, yet further addition of multifaceted melodies and seamless syncopation finds the group stepping up its songwriting. Witness "25 Or 6 To 4" and "Make Me Smile," smashes that resonated with the mainstream.

Mastered from the original master tapes, Mobile Fidelity's numbered-edition hybrid CD lavishes Chicago II with audiophile clarity, transparency, and detail. Pulling back the curtain on the recordings, this collector's version expands the soundstaging dimensions, imaging proportions, and dynamic information, allowing the songs to breathe and enjoy a roominess that enhances the stellar performances and interwoven structures. In particular, the harmonic vocals naturally carry and possess lifelike decay, never in competition with but always in sympathy with the telepathic instrumentation.

As reflected by the 7-part, 13-minute "Ballet for a Girl in Buchanan" suite, Chicago II draws from classical as well as traditional rock and jazz influences in presenting an experience that eviscerates "disparate" when pertaining to musical styles. Paired amidst progressive rhythms, driving horns and gritty R&B vocals again affords the band the privilege of rocking as hard as any of their contemporaries. And yet, due to the collective's diversity and prowess, Chicago also lends poignant sensitivity to ballads such as "Colour My World."

The septet's command of switching between aggressiveness and intensity, softness and sensuality, defines Chicago II. Such dichotomy is represented in the form of guitarist Terry Kath, a secret weapon whose contributions on Mobile Fidelity's exquisite version emerge with newfound energy and emotionalism. Highlighted, too, are the group's forays into thematic lyrics, with the politically barbed "It Better End Soon" and grim "Poem for the People" speaking to the record's original dedication that states: "With this album, we dedicate ourselves, our futures and our energies to the people of the revolution. And the revolution in all of its forms."

1. Movin' In
2. The Road
3. Poem for the People
4. In the Country
5. Wake Up Sunshine
6. Ballet for a Girl in Buchannon (Suite)
7. Fancy Colours
8. 25 or 6 to 4
9. Memories of Love (Suite)
10. It Better End Soon (Suite)
11. Where Do We Go From Here
Related Videos
Review: MoFi Electronics' Turntable Trio - UltraDeck, StudioDeck and Foundation
Customers Also Bought