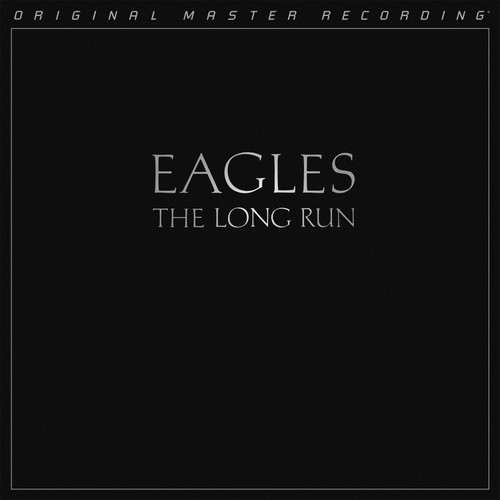 Eagles Predict Their Staying Power with The Long Run: Mobile Fidelity's Numbered-Edition Hybrid SACD of the 1979 Album Is Sourced from the Original Analog Master Tapes for Audiophile Sonics

Seven-Times-Platinum Smash Stood as the Band's Last Studio Record for More Than 25 Years: Includes the Hits "Heartache Tonight," "I Can't Tell You Why," "In the City," and the Title Track

Originally intended as a clever poke at the era's trends that critics maintained were making the band irrelevant, the title of and music on The Long Run continue to prove the Eagles got the last laugh. Created in the wake of the group's demanding tour for the blockbuster Hotel California, the 1979 record ultimately became the final record the Eagles would create for nearly three decades. Stacked with first-rate material and three mammoth singles, the seven-times-platinum effort ensured the Eagles never drifted far from the public's consciousness.

Sourced from the original analog master tapes and housed in a mini-LP gatefold sleeve package, Mobile Fidelity's numbered-edition hybrid SACD presents The Long Run in audiophile sound. Akin to the audiophile label's other Eagles SACDs, this collectible edition plays with organic richness, spectacular dynamics, and microscopic levels of detail. Songs come across with an epic sweep and feature front-to-back soundstages that give the music desirable air, roominess, and separation.

"Who is gonna make it?/We'll find out in the long run," posits Don Henley on the album's opening track, an R&B-fueled classic that reached No. 8 on the charts. Henley later addressed the irony of the lyrics; his group was in the process of breaking apart when he wrote it. Yet the singer-songwriter and colleague Glenn Frey clearly knew something others failed to recognize. Related themes of survival, resilience, and dark humor course throughout The Long Run, which also marks the arrival of bassist Timothy B. Schmit. His lead vocal anchors the No. 8 hit "I Can't Tell You Why," a staple he co-wrote with Henley and Frey.

That dynamic duo has a hand in all but one of the songs, "In the City," Joe Walsh's slide-guitar-appointed ode to endurance. Walsh also shares a writing credit on the closing "The Sad Cafe," a melodramatic favorite whose lineage extends to another of the band's longtime collaborators, J.D. Souther. He, along with Frey and Henley, teamed with Detroit legend Bob Seger on penning the record's signature anthem: the Grammy-winning "Heartache Tonight." Fueled by rhythmic handclaps, a romping groove, and the band's trademark California-bred country-rock style, the chart-topper comfortably sits alongside deep cuts such as the winking shuffle "The Disco Strangler" and cinematic "King of Hollywood."

The challenges and pressures associated with making The Long Run after dealing with the unimaginable success of Hotel California ended up grounding the Eagles. Yet the album's enduring merit, performances, and melodies confirmed Henley and Frey's beliefs. The Eagles are still thriving. They made it. The long run continues.