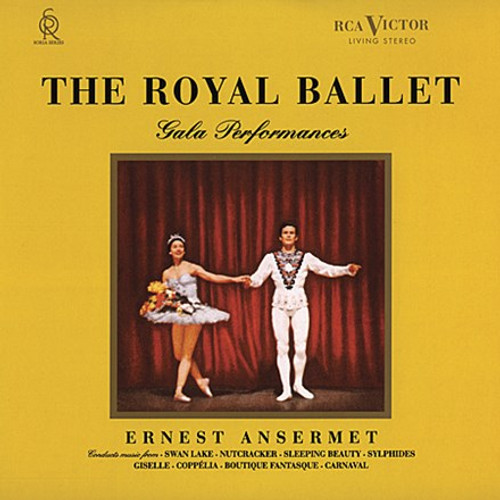 Analogue Productions has remastered these historic recordings from the original master tapes. The majority of the titles were remastered by renowned European mastering engineer Willem Makkee while a pair of titles in the series including this LP were mastered by Bernie Grundman. The vinyl releases will be pressed at Quality Record Pressings and plated by Gary Salstron. The LP packaging will be original tip-on jacket facsimiles that precisely duplicate the original cover art.

In the hearts of thousands, No. 1 on the Top RCA list. While the bulk of Ernest Ansermet's recordings were made with L'Orchestre de la Susise Romande, there were a few with the Paris Conservatoire Orchestra and the very occasional foray into recordings with London orchestras, one of these being with the Orchestra of the Royal Opera House, Covent Garden, in 1959.

Audiophilia Online Magazine wrote: "This is the stuff of which dreams are made. The Royal Ballet Gala is one of the finest RCAs recorded in London's Kingsway Hall. The chunks of great ballet music are well served by orchestra, conductor and engineer. Performances are executed to a very high standard - the Royal Opera House Orchestra, both then and now, rank as one of the finest of opera orchestras.

"Conductor Ansermet keeps the pace moving, giving the listener the impression of a dance event rather than a dramatic concert hall reading...The recorded sound is simply amazing! Lustrous is one word that comes to mind, accurate is another. Tonally, Messrs. Williamson and Wilkinson have used their considerable talents to capture the orchestra superbly. Woodwind and strings glow and resonate, transporting this listener to a time when simpler recording was better. Brass ring out thrillingly and percussion effects are very musical."