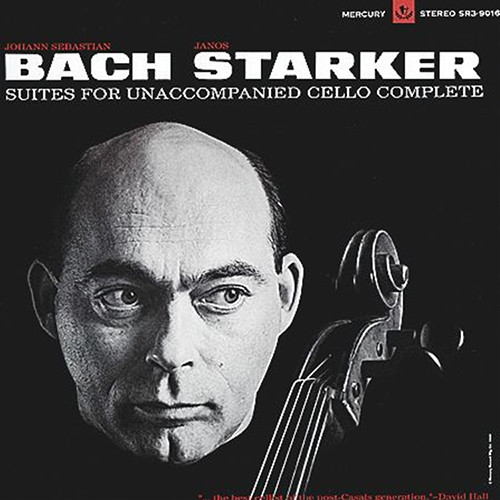 This is the absolute best version of Bach's Cello Suites you will ever hear!

Today it is difficult to understand that despite the tremendous Bach renaissance that took place in the 19th century many compositions by the Cantor of St. Thomas’s Church in Leipzig had been underrated. The Cello Suites, for example, have been regarded for almost 300 years as purely a set of tricky etudes that every virtuoso in the making simply must tackle. What recording engineers and their equipment can bring to the ears is quite astounding. So it was back in the Thirties with Pablo Casal’s legendary recording against which every cellist is measured today and to whose perfection he aspires.

Janos Starker’s recording of the Suites from 1963 and 1965 makes a lasting impression on the listener, even when compared with other recordings from the digital era, and even record producers who are well used to recorded excellence have been highly impressed. For Charlotte Gilbert of the Mercury record label, these recording sessions were one of five truly great events in all her 20 years of recording experience. Without a doubt, Starker allows his instrument to resound freely but without forcing the tone. Starker’s full-bodied sound and technical brilliance are complemented by his finely chiselled interpretation that lends immense expression to Bach’s thrilling harmony and verve to the strict rhythmic construction of the movements. Just listen to his organ-like double-stopped passages, the eloquent dialogues, and the pure excitement created by his highly individual treatment of tempo. Then you will surely agree with the often-quoted paradox that Bach’s Cello Suites are ‘polyphony for a solo instrument’.

'The sound on this Speakers Corner reissue, is superb. The cello, situated to the right of stage center and back a bit from stage front, is gorgeously rich and full in tone color; dynamics are exceptionally impressive. This is a set that all music-loving audiophiles should own.'
- Jonathan Valin, The Absolute Sound, June/July 2005, Issue 154

'This Mercury release from 1966 has long been treasured by music lovers and audiophiles for both the performances and the sound. Thanks to Speakers Corner, this beautifully produced, three-LP boxed set - restores this historic set to the catalog. The updated annotation includes new notes by the 80-year-old Starker.'
Michael Fremer, Stereophile, February 2005

“Timed to honor Starker's eightieth birthday last year, this is an extremely special reissue...This is one of those records that seems to hold a magic mirror to sound - in this case the sound of a man playing a violoncello in space, in time, captured forever. This is a near physical manifestation of a performance out of thin air...I have always been a fan of the original records, but this is one of those rare instances, especially of such a highly regarded and sought after set, where the re-issue offers far greater pleasure and insight than the original release...Starker's technique, his touch, his grasp of instrument and line is simply as riveting and utterly convincing as one could ever hope to hear - and hear it you do. Congratulations to Speakers Corner Records who have outdone themselves with this most valuable and masterfully produced set, a sentiment that seems to be becoming a habit.'
- Richard S. Foster, Hi-Fi+, Issue 36 - Hi-Fi+ Record of the Year 2004