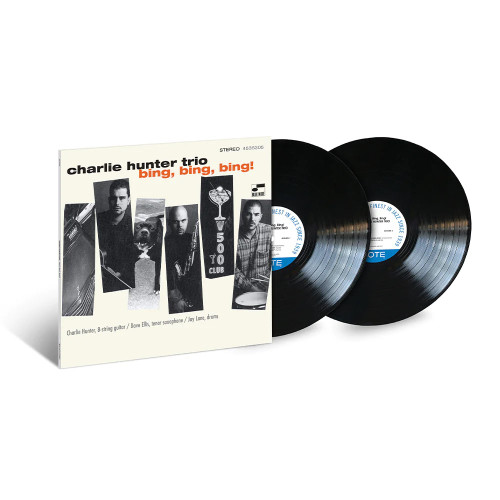 Charlie Hunter's 1995 Blue Note debut Bing Bing Bing! was a groove-heavy tour-de-force that announced the arrival of a virtuosic new guitarist on the scene. Hunter's unique concept on his 8-string guitar allowed him to lay down a bass line and play chords as well as a melodic line at the same time, producing music that was at once impressive and irrepressible. With his powerful trio featuring tenor saxophonist Dave Ellis and drummer Jay Lane plus contributions from trombonist Jeff Cressman, Ben Goldberg, pedal steel guitarist David Phillips, and percussionist Scott Roberts, Hunter delivered a 10-song set of propulsive originals including "Greasy Granny" and "Fistful of Haggis" plus an unforgettable cover of Nirvana's "Come As You Are." Hunter would go on to record six more excellent albums for Blue Note, and also gain notice for playing on D'Angelo's 2000 neo-soul masterpiece Voodoo.