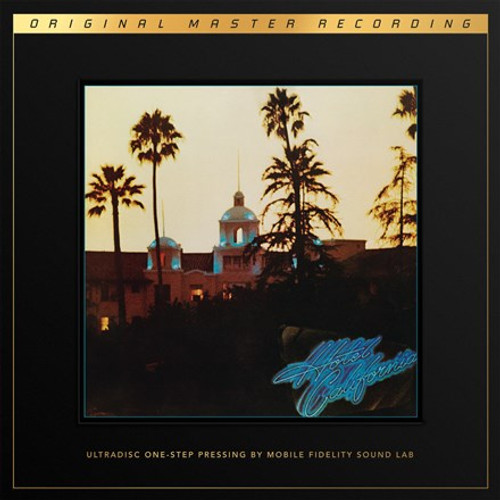 The moment the instantly recognizable intertwined guitar passage on the title track to the Eagles' Hotel California begins, the record's genius becomes obvious all over again. Ranked the 118th Greatest Album of All Time by Rolling Stone, certified by RIAA as the third best-selling LP in history, and considered the foundation on which the Golden State's mid-‘70s music scene was built, the 1976 landmark is a music staple immune to shifts in trends, eras, and styles. Fearlessly addressing the chaos and consequences of American life, its songs remain strikingly prescient and gain creedence with each passing day.

Mastered from the original analog master tapes, pressed on MoFi SuperVinyl, and limited to 17,500 numbered copies, Mobile Fidelity's UltraDisc One-Step 180g 45RPM 2LP vinyl box set ensures you will want to permanently check into and never leave this particular Hotel California. Up to the herculean task of standing head and shoulders above all prior reissues, this collectible edition plays with extreme clarity, organic richness, tube-like warmth, massive dynamics, and microscopic levels of detail. You'll be able to practically smell the colitas and feel the breeze in your hair. Songs come across with an epic sweep and feature immersive, front-to-back soundstages that allow the music unprecedented air, roominess, and separation. As for the noise floor? It's basically as invisible as the spirits that waft in the corridors of the unforgettable title song.

Aesthetically, the premium packaging and presentation of the UD1S Hotel California pressing befit its esteemed status. Housed in a deluxe box, it features gorgeous foil-stamped jackets and faithful-to-the-original graphics that illuminate the splendor of the recording. From every angle, this UD1S reissue exists as a curatorial artifact meant to be preserved, touched, and examined. It is made for discerning listeners who prize sound quality and production, and who desire to fully immerse themselves in everything involved with the album, from the renowned cover art to the meticulous finishes.

Indeed, the opportunity to zero in on all the particulars of the 26-million-selling Eagles record dubbed "a legitimate rock masterpiece" by vaunted Los Angeles Times scribe Robert Hilburn has never been better. A global phenomenon that marked the band debut of guitarist-singer Joe Walsh, Hotel California continues to resonate and connect with listeners of all generations taken by its narrative depth, stark directness, picturesque melodies, daring majesty, and ardent emotionalism. Adorned with a breathtaking exterior photograph of the Beverly Hills Hotel that serves as the simultaneously haunting and alluring cover art, and rounded out by a rear-cover shot of the Lido Hotel lobby that reinforces a notion that teeters between permanence and transience, Hotel California is brilliantly tied to a specific place that functions as a universally understood metaphor for the American Dream.

Confronting the darker undercurrents and oft-ignored constructs attached to that romantic notion, the record's songs revolve around a host of shared themes: excess, mobility, stability, illusion, fame, destruction, and idealism included. Notably, Hotel California appeared at a crucial junction in American history: During the country's bicentennial and amid escalating controversies related to the Vietnam War, energy crisis, and governmental corruption. That the Eagles manage to channel such cultural, social, and economical matters into a cohesive, stately, big-picture statement is alone a stupendous feat. That the album's reach, boldness, vitality, accessibility, and understated intensity have never waned make it a marvel.

Reflecting on Hotel California 40 years after its original release, and indirectly explaining its enduring appeal and increasing relevance, singer-songwriter Don Henley confirmed the record pertains to the "loss of innocence, the cost of naiveté...the difficulties of balancing loving relationships and work, trying to square the conflicting relationship between business and art; the corruption in politics, the fading away of the Sixties dream of ‘peace, love and understanding.'"

It can be argued that Henley and company squarely hit on and drove home those ideas in the surreal title track, chart-topping "Life in the Fast Lane," and grand "The Last Resort" alone. But that would miss the forest for the trees. Experienced as an unbroken whole, complete with the pristinely shot imagery and physical grooves, Hotel California unfolds like a geography-conscious saga by James Michener and plays like color-saturated movie shot on 70mm film by Martin Scorsese. It's about our collective and individual decisions – and the shape of our past, present, and future. And, just like that conjured by our imaginations, Hotel California continues to take on a life of its own.