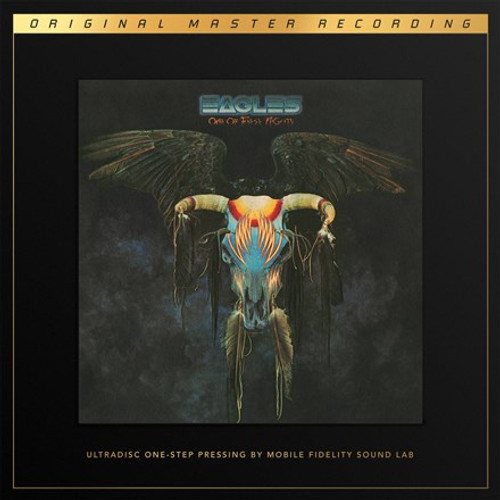 One of These Nights occupies an important, unique place in the Eagles' discography given it represents the final album the group made before releasing the bajillion-selling Their Greatest Hits (1971-1975) compilation. The timing is telling. A coming-out party for Glenn Frey and Don Henley's songwriting skills, the studio record – the band's fourth, and its first to hit #1 on the charts – signifies the group's ascent to superstar status. Home to three massive singles (the title track, "Lyin' Eyes," and "Take It to the Limit") and nominated for four Grammy Awards, the quadruple-platinum 1975 effort solidified the Eagles' Southern California-reared sound and made the band a household name.

Mastered from the original analog tapes, pressed on MoFi SuperVinyl, and strictly limited to 10,000 copies, Mobile Fidelity's UltraDisc One-Step 180g 45RPM 2LP vinyl box set takes One of These Nights to the limit. And then some. Playing with reference sonics and a practically indiscernible noise floor thanks to MoFi SuperVinyl's special formula, it provides a rich, dynamic, transparent, and three-dimensional view into a release that moved country-rock ahead by leaps and bounds – and paved the way for the Eagles' ascendancy to global superstardom. The opportunity to zero in on the particulars of the Eagles' golden harmonies, distinct vocal timbres, and cohesive interplay has never been better.

Visually, the premium packaging and presentation of the UD1S One of These Nights pressing befit its esteemed status. Housed in a deluxe box, it features beautiful foil-stamped jackets and faithful-to-the-original graphics that illuminate the splendor of the recording. From every angle, this UD1S reissue exists as a curatorial artifact meant to be preserved, touched, and examined. It is made for discerning listeners that prize sound quality and production, and who desire to fully immerse themselves in the art – and everything involved with the album, from the renowned cover art to the meticulous finishes. As much as any Eagles LP, the connection between the imagery and the music and the band on One of These Nights runs deep. No wonder it led to a Grammy Nomination for Best Album Package.

Devised by West Texas artist Boyd Elder, the striking skull-and-feathers themed piece gracing the front of One of These Nights represents where the Eagles have been and where they were headed. Album art director Gary Burden explained: "The cow skull is pure cowboy, folk, the decorations are American Indian-inspired, and the future is represented by the more polished reflective glass beaded surfaces covering the skull." Moreover, Elder had met the group years earlier when Henley and company performed at one of his gallery openings in California. MoFi's UD1S box set allows Elder's vision (and Burden's debossed treatment of the image) to pop and appear as if it was a standalone object.

Of course, what's inside the sleeves, and in the grooves, proves equally compelling. Though One of These Nights marks the final appearance of band co-founder Bernie Leadon on an Eagles LP and contains three of his tunes, the record's tremendous success owes to Frey and Henley's timeless contributions. Taking the next step in their maturation and evolution, the pair crafted several songs while living together as roommates in a rented house in which they converted a music room into a recording studio.

The duo's bond and chemistry pulse throughout the record – particularly in the tight arrangements, tasteful instrumental flourishes, and seamless blending of the folk, country, and rock elements. The musical combinations and partnership not only produced the Eagles' first million-selling single (the slow-dancing "Take It to the Limit," co-written with bassist-vocalist Randy Meisner) and the Frey-led cheating classic "Lyin' Eyes," but the famed title track, which nods to the era's nascent disco scene as well as Kenneth Gamble and Leon Huff's Philly soul platters.

Frey named "One of These Nights" as his favorite Eagles composition of all-time; Meisner's high harmonies alone send the track into a galaxy of its own. Speaking of the latter, Leadon's instrumental "Journey of the Sorcerer" ventures into another universe and was soon used by Douglas Adams as the theme to his "The Hitchhiker's Guide to the Galaxy" radio series. Inspiration and creative experimentation also dragged the Eagles into the blues. Another Frey-Henley gem, the self-probing "After the Thrill Is Gone" serves as a response song to B.B. King's signature track and more evidence the band was turning the lens inward for lyrical narratives. Like everything on One of These Nights, the song confirms the Eagles were breathing rare musical air.