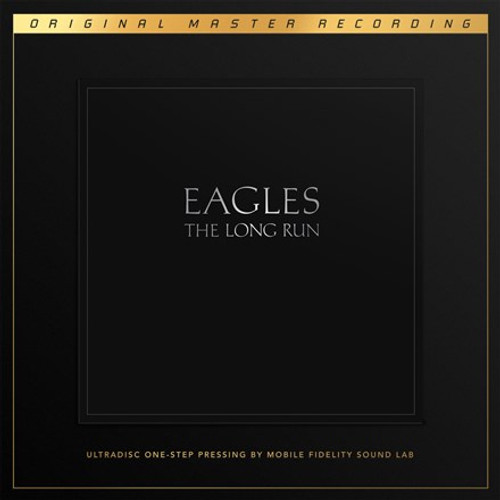 Seven-Times-Platinum Smash Stood as Band's Last Studio Record for More Than 25 Years: Includes "Heartache Tonight," "I Can't Tell You Why," "In the City," and the Title Track

Originally intended as a clever poke at the era's trends that critics maintained were making the band irrelevant, the title of and music on The Long Run continue to prove the Eagles got the last laugh. Created in the wake of the group's demanding tour for the blockbuster Hotel California, the 1979 record ultimately became the final record the Eagles would create for nearly three decades. Stacked with first-rate material and three mammoth singles, the seven-times-platinum effort ensured the Eagles never drifted far from the public's consciousness.

As for the noise floor? Practically nonexistent. Though the Eagles are renowned for great-sounding albums, The Long Run might be the most note-perfect work in their catalog – the result of more than 18 months of painstaking recording sessions. This UD1S version demonstrates why. The placement of the rounded bass lines, extension of the piano accents, and golden tones of the blended harmonies are constantly identifiable and practically take you inside the arrangements.

Complementing the gorgeous sonics, the premium packaging of the UD1S The Long Run pressing befits its esteemed status. The deluxe box features foil-stamped jackets and faithful-to-the-original graphics that illuminate the splendor of the recording. This UD1S reissue exists as a curatorial artifact meant to be preserved, touched, and examined. It is made for discerning listeners who prize sound quality and production, and who desire to fully immerse themselves in everything involved with the album, including the artwork.

Intentionally simple, the cover is designed by John Kosh, who devised the art for the Beatles' Abbey Road and The Who's Who's Next. The stark black-and-gray color palette speaks to the exhaustion the band was feeling at the time – as well as the malaise conveyed in several songs. Kosh's creation also can be seen to reflect a gravestone, and though the Eagles would fall dormant for more than two decades, the tombstone interpretation is line with the tongue-in-cheek nature of the album title: The Eagles would return and outlast a majority of their lesser contemporaries and joyless critics.

"Who is gonna make it?/We'll find out in the long run," posits Don Henley on the album's opening track, an R&B-fueled classic that reached No. 8 on the charts. Henley later addressed the irony of the lyrics; his group was in the process of breaking apart when he wrote it. Yet the singer-songwriter and colleague Glenn Frey clearly knew something others failed to recognize. Related themes of survival, resilience, and dark humor course throughout The Long Run, which also marks the arrival of bassist Timothy B. Schmit. His lead vocal anchors the No. 8 hit "I Can't Tell You Why," a staple he co-wrote with Henley and Frey.

That dynamic duo has a hand in all but one of the songs, "In the City," Joe Walsh's slide-guitar-appointed ode to endurance. Walsh also shares a writing credit on the closing "The Sad Cafe," a melodramatic favorite whose lineage extends to another of the band's longtime collaborators, J.D. Souther. He, along with Frey and Henley, teamed with Detroit legend Bob Seger on penning the record's signature anthem: the Grammy-winning "Heartache Tonight." Fueled by rhythmic handclaps, a romping groove, and the band's trademark California-bred country-rock style, the chart-topper comfortably sits alongside deep cuts such as the winking shuffle "The Disco Strangler" and cinematic "King of Hollywood."

The challenges and pressures associated with making The Long Run after dealing with the unimaginable success of Hotel California ended up grounding the Eagles. Yet the album's enduring merit, performances, and melodies confirmed Henley and Frey's beliefs. The Eagles are still thriving. They made it. The long run continues.