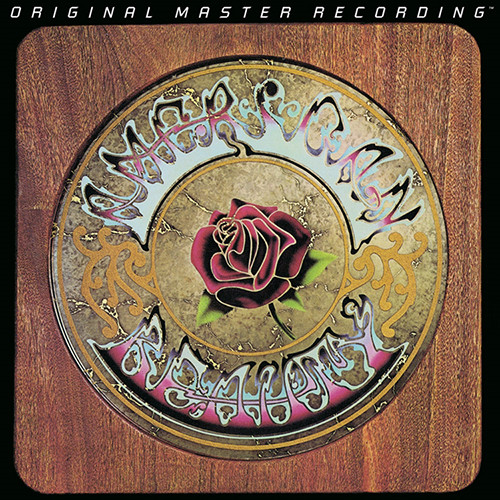 Close Your Eyes as the Dead Serenade You in Your Room: Mobile Fidelity Edition of American Beauty Epitomizes Realistic Space, Vocals, Instrumentation, and Ambience

Ranked #261 on Rolling Stone's List of the 500 Greatest Albums of All Time: Includes "Truckin'," "Sugar Magnolia," "Friend of the Devil," "Ripple"

American Beauty is the most perfectly realized, superbly played, and openly natural folk-rock record ever released. They don't make albums like this anymore, but thankfully, Mobile Fidelity's extraordinary 180g 45RPM 2LP set allows you to experience this 1970 masterpiece with unrivaled intimacy, realism, detail, and perspective.

The pinnacle of the Dead's studio output, American Beauty lives up to its name—as well as that of the "American Reality" ambigram on the iconic cover. Airy vocal harmonies blow like fresh breezes. Strummed acoustic guitars amicably intermingle with plaintive percussive beats. Warmth, relaxation, and poignancy envelop the performances and create sensations of bliss, peace, and honesty. Songs flower with majestic melodies and emotionally direct lyrics. It's a rare album that makes one feel, restores one's faith, and renews one's appreciation for all life offers.

Mastered from the original master tapes and pressed on 180g LP at RTI, this deluxe set possesses seemingly limitless dynamics, reference-grade presence, and expansive soundstages. The seamless, effortless integration of the group's vocals has always been a high point of American Beauty, and when you hear it here, you'll want every record you own to sound half as good. Every member's distinctive singing resounds with tube-like clarity; the intended expressionism is as plain as day. Instruments, too, resonate in glorious Technicolor. The supple tension of Phil Lesh's bass lines, charismatic timbres of Jerry Garcia's pedal-steel fills, and interwoven dialogue between the pianos and percussion are rendered with lifelike scale and tone.

Made just months after its companion release, Workingman's Dead, the San Francisco legends' second 1970 masterpiece furthers the former work's close-knit relationship between country and folk while adding extra rock and bluegrass currents. Understated amplified passages, graceful melodies, layered singing, and old-time string flavors—including mandolin work from masterful guest David Grisman—bestow the material with easygoing, comfortable vibes. Again taking advantage of the best songwriting of Robert Hunter's career, the Dead turns in its most collective studio performance, with every individual contributing equally and focusing on nothing but the songs at hand.

Indeed, Garcia doesn't even indulge in a single guitar solo on the record. A majority of fare lacks any significant instrumental breaks. The Dead recorded the foundations (drums, bass, acoustic guitars) of nearly every track live, which helps explain why American Beauty sounds so powerfully rich and clear. Coupled with the band's personal reflections of the circumstances surrounding them—Bob Weir's parents had died, Garcia's mother and Lesh's father were in the process of passing, Ron "Pigpen" McKernan's health was in decline—these characteristics combined to yield a purity of heart that exceeds that managed by Dead peers (and roots revivalist leaders) The Band and Bob Dylan.

From Garcia's breathtaking gospel-laden homage to his mother ("Brokedown Palace") to Lesh's healing salve in the form of the groove-based "Box of Rain," from Weir's jaunty and free-wheeling summer escape "Sugar Magnolia" to McKernan's eloquently simple homespun plea "Operator," all the way to the closing autobiographical anthem "Truckin'," American Beauty feels like the warm, spirit-infusing embrace of a loved one after a long journey away. Welcome home.

"There is more inner detail and texture, more clarity and verisimilitude, on these MoFi reissues than on early original pressings, which sound thinner and grainier by comparison. The SACDs sound more like very good analog than mere digital, but the immediacy of the 45rpm LPs is startling, even after hearing the SACDs."
—Marc Mickelson, The Audio Beat