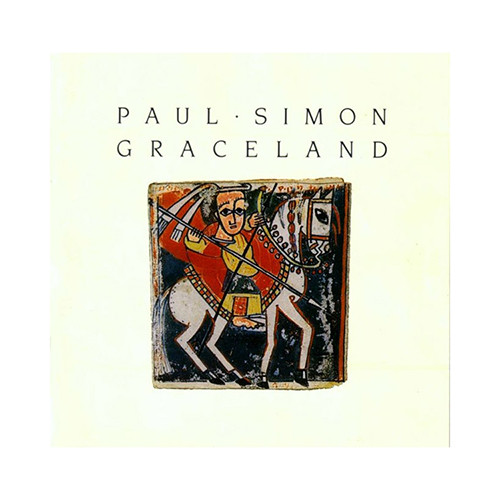 With Graceland, Paul Simon hit on the idea of combining his always perceptive songwriting with the little-heard mbaqanga music of South Africa, creating a fascinating hybrid that re-enchanted his old audience and earned him a new one. It is true that the South African angle (including its controversial aspect during the apartheid days) was a powerful marketing tool and that the catchy music succeeded in presenting listeners with that magical combination: something they'd never heard before that nevertheless sounded familiar.

As eclectic as any record Simon had made, it also delved into zydeco and conjunto-ﬂavored rock & roll while marking a surprising new lyrical approach (presaged on some songs on Hearts and Bones); for the most part, Simon abandoned a linear, narrative approach to his words, instead drawing highly poetic ("Diamonds on the Soles of Her Shoes"), abstract ("The Boy in the Bubble"), and satiric ("I Know What I Know") portraits of modern life, often charged by striking images and turns of phrase torn from the headlines or overheard in contemporary speech.

An enormously successful record, Graceland became the standard against which subsequent musical experiments by major artists were measured and continues to provide rewards to its listeners and remains a pivotal listening experience for writers, artists and fans.

The universal appeal of the music of Graceland proved more powerful and enduring than the political hotbed attending its creation. In 1986, the album sold 14 million copies worldwide, and received universal praise from critics around the globe. Paul Simon and the members of Ladysmith Black Mambazo performed on Saturday Night Live and appeared on the cover of Rolling Stone.

By January of 1987, "You Can Call Me Al" was everywhere and Graceland won 'Album of the Year' at the Grammy Awards in 1987. Then, in an unprecedented carryover, the album garnered the Grammy for 'Song of the Year' with its title track in 1988. The album generated three hit singles and kept Simon and the Graceland tour on the road for five years.

This audiophile edition of Graceland has been remastered on 180g 12" vinyl and includes an art-quality collectible poster and a download card with the full album plus three bonus tracks.

"In many ways, Graceland was the most extraordinary experience in my entire career," notes Simon. "The insight into rhythm was the great gift that I received from making the trip to South Africa, and collaborating with African musicians."

"This lacquer cut processed and pressed at RTI on 180 gram vinyl sounds dramatically superior to the original in every way. The overall tonal balance is far superior. The low bass is as powerful as on the original but much better controlled. If the opening drum thwacks on 'Boy In the Bubble,' don't sound deep, ultra-tight and tuneful, blame your system, not the record. You are guaranteed to hear heretofore hidden musical details and parts that on the original slipped through the musical cracks. This reissue has an overall tonal richness and clarity as well as dynamic impact only hinted at on the original."
– Michael Fremer, Analog Planet

Paul Simon Graceland: 25th Anniversary Track Listing:
The Boy in the Bubble
Graceland
I Know What I Know
Gumboots
Diamonds on the Soles of Her Shoes
You Can Call Me Al
Under African Skies
Homeless
Crazy Love, Vol. II
That Was Your Mother
All Around the World or the Myth of Fingerprints