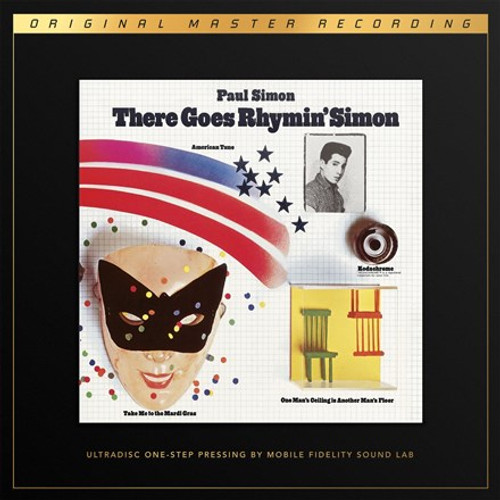 Demonstrating a deep-seated flair for soul and R&B, Paul Simon recruited gospel backup singers and traveled to the Muscle Shoals Sound Studios to further refine the vibrant sounds he desired for There Goes Rhymin' Simon. Clearly, his instincts proved correct. Many rightly consider the iconic singer-songwriter's third album a masterpiece – one that, per critic Robert Christgau, "suggests a new grace and flexibility for the mass-pop mode, and invests small subjects and emotions with an almost luminous wit and awareness."

Limited to 10,000 numbered copies, pressed on MoFi SuperVinyl at RTI, and mastered from the original master tapes, Mobile Fidelity's ultra-hi-fi UltraDisc One-Step 180g 45RPM 2LP collector's edition makes for an extraordinary listening experience. It strips away any remaining barriers to provide a clear, super-dynamic view of a record nominated for two Grammy Awards and that climbed to the #2 position on the Billboard charts. The expanse and depth of the soundstage, fullness of detail, varied textures of the percussion, and natural rise and decay of individual notes reach demonstration-grade levels.

Visually, the lavish packaging and gorgeous presentation of the UD1S There Goes Rhymin' Simon pressing befit its select status. Housed in a deluxe box, it features special foil-stamped jackets and faithful-to-the-original graphics that illuminate the splendor of the recording. No expense has been spared. This reissue exists as a curatorial artifact meant to be preserved, touched, and examined. It is made for discerning listeners who prize sound quality and production, and who desire to fully immerse themselves in everything involved with the album, from the images to the finishes.

The newly revealed transparency, presence, balance, immediacy, and dark-black backgrounds provided by Mobile Fidelity's UD1S set showcase the scope and craft of Simon's alluring melodies – not to mention the vocal performances that, arguably, remain the album's standout element. Simon's singing hits peaks on There Goes Rhymin' Simon that equal or best those on any of his other works, Simon and Garfunkel included. Assured, natural, and supple, his baritone resonates with a realism and extension that immerse you in the song. At certain times, he lets loose; during others, he becomes a gentle balladeer on par with a prized jazz chanteur. Such versatility alone remains staggering, but he also receives support on two tracks by the legendary Dixie Hummingbirds. The pairing is nothing short of magical.

The proof of the consummate chemistry, of course, resides in the final results, which run the gamut from Jamaican-leaning rhythms and orchestral flourishes to steady blues currents and New Orleans-soaked brass accents. Simon's instinct for strong narrative conveyed with heartfelt emotion completes a trifecta of instrumentation, arrangement, and delivery. Taking a pulse on episodes such Watergate and the Vietnam War, the singer meditates on experiences universal to everyone in America – never more saliently than on "American Tune," an anthem musically based on a hymnal and whose lyrics continue to hold true today. Similarly, Simon spins gleeful absurdity, antisocial behavior, and pensive reflection into truth on "Kodachrome," a number-two smash that permanently established him as a solo star.

Hits and singles aside, There Goes Rhymin' Simon stands as as a cohesive statement woven together, to quote Rolling Stone critic Stephen Holden, as "a rich and moving song cycle, one in which each cut reflects on every other to create and ever-widening series of refractions." Indeed, everything looks worse in black and white, and Mobile Fidelity's UD1S set plays with the greens of summers and those nice bright colors.