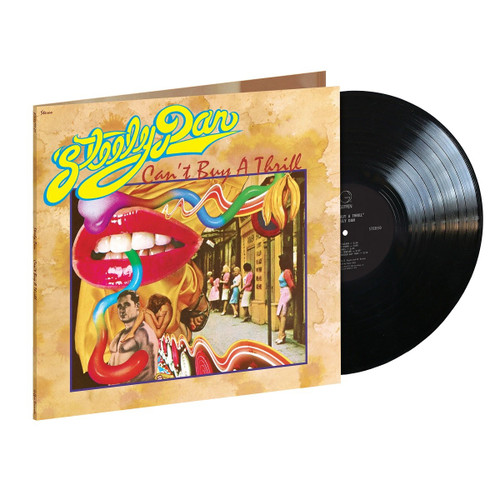 At long last: the classic Steely Dan MCA Records catalog is back on vinyl! The vinyl series will kick off with Can't Buy A Thrill, now in its 50th anniversary year, which features the band's breakthrough hits "Do It Again," "Reelin' in the Years" and the recently viral "Dirty Work." Meticulously remastered by Bernie Grundman, these reissues were cut by Alex Abrash at AA Mastering studio and pressed at Precision.

Walter Becker and Donald Fagen decamped to Los Angeles in late 1971 and began recording Can't Buy A Thrill with the angelically voiced David Palmer handling half the vocal duties, Fagen some others and drummer Jim Hodder lending his idiosyncratic pipes to the magnificent "Midnite Cruiser." Just about everything Steely Dan would achieve is heard on this album. Class sessioneers? Check. Classy lyrics? Of course. Potent pop? "Reelin' In The Years" and the legendary "Do It Again" have the bases covered.

Recording at The Village Recorder, LA this debut disc is a shimmering masterpiece with its ten songs defining the phrase – all killer, no filler. Jeff Baxter adorns the album with the kind of chops few had heard in the mainstream of rock at that point. His pedal steel solo on "Fire in the Hole" and his stunning solos on "Change of the Guard" and "Only A Fool Would Say That" are worth the price of admission. That's Denny Dias playing the sitar on "Do It Again" while Randall busts out his axe for "Reelin' In The Years."

This is an affair that constantly throws up surprises. Songs like "Kings" and "Brooklyn (Owes The Harmer Under Me)" are as intelligent and evocative as rock has ever got. There is also mambo and samba and Latin licks leaking out. The chord changes are exemplary and this is reckoned to be the first post-boogie. This is where adolescence becomes the province of hungry young men.