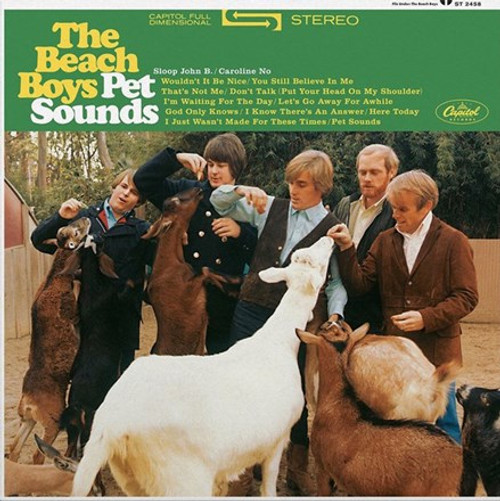 Be alerted when The Beach Boys - Pet Sounds: 50th Anniversary (180g Vinyl LP)*** is back in stock

The Beach Boys' iconic 1966 album, Pet Sounds, is universally hailed as one of popular music's most important recordings of all time. May 16, 2016 marks the acclaimed album's 50th anniversary, and to commemorate the milestone, The Beach Boys and Capitol/UMe are reissuing remastered editions of Pet Sounds on 180-gram vinyl in both mono and stereo with faithfully replicated original artwork.

In 1965, with the Beach Boys out on tour, Brian Wilson began session work on some of the most deeply personal recordings of his career. Inspired by The Beatles Rubber Soul, he challenged himself to create an immaculate musical masterpiece. A vast departure from the bands' then commercial sound, the resulting "concept album" Pet Sounds achieved great critical success helping usher in a new musical landscape and hit the Top 10 in the US while topping the charts in the UK.

The groundbreaking Pet Sounds is undoubtedly The Beach Boys' most acclaimed and accomplished album not to mention arguably the most influential pop record of all time. This is the album that took the group and music in general to a whole different level, both in terms of composition and production. Landmark songwriting ("Wouldn't It Be Nice," "God Only Knows," "Caroline No," "Sloop John B"), incredible vocal harmonies and majestic arrangements coalesce to form a rich collage of sound which overflows with artistic depth and pure emotion.

The Beach Boys' eleventh studio effort overall, Pet Sounds has reigned atop countless critic and fan polls, and has maintained its timeless rank as one of popular music's most-cited influences. More than 100 domestic and international publications and journalists have lauded Pet Sounds as one of the greatest albums ever recorded, and it entered the Grammy Hall of Fame in 1998. Platinum-certified, Pet Sounds tops MOJO magazine's "Greatest Albums of All Time" at No. 1, while Rolling Stone ranked it at No. 2 in the magazine's list of the "500 Greatest Albums of All Time."

"Pet Sounds blew me out of the water. First of all, it was Brian's writing. I love the album so much. I've just bought my kids each a copy of it for their education in life - I figure no one is educated musically 'til they've heard this album." - Paul McCartney