Price Now $199.99
Was
Was
Save $0.00 (0%)
Questions and Answers
Availability: In Stock
This item is in stock and ready to ship. Depending on the time of day when you place your order, it will ship same day or next business day. 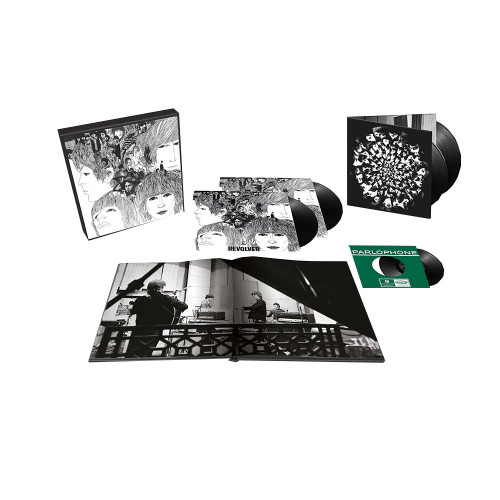 Revolver was The Beatles' 1966 album that changed everything. Spinning popular music off its axis and ushering in a vibrant new era of experimental, avant-garde sonic psychedelia, Revolver brought about a cultural sea change and marked an important turn in The Beatles' own creative evolution. With Revolver, John Lennon, Paul McCartney, George Harrison, and Ringo Starr set sail together across a new musical sea.

This Super Deluxe Special Edition of Revolver features a new mix by Giles Martin and Sam Okell, the original mono mix, a 4-track EP, 31 session takes and home demos, a 100-page book with a foreword by Paul McCartney, an essay by Questlove, detailed track notes, photos and ephemera including handwritten lyrics, tape boxes and extracts from Klaus Voormann's graphic novel on the making of the cover art. Half-speed-mastered 180g LPs + 7-inch vinyl EP in a 12.56" x 12.36" slipcase.