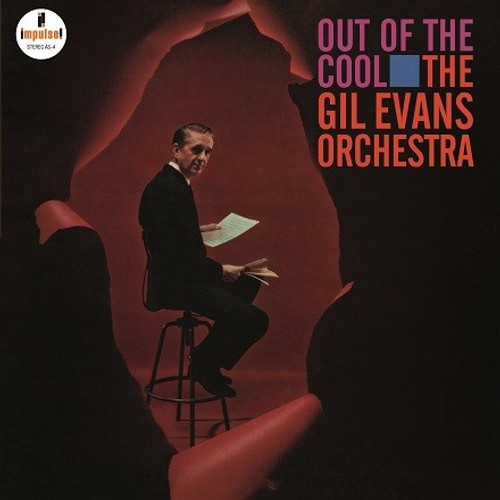 All-Analog 180g Vinyl LP of The Gil Evans Orchestra's Out of the Cool Remastered from the Original Analog Tapes, Pressed at QRP, and Housed in Stoughton Gatefold Jacket

If one album evokes the style, the ethos, and the vibe of Creed Taylor's Impulse! label it is The Gil Evans Orchestra's 1961 masterpiece Out of the Cool. The 48 year old pianist, arranger and bandleader had done much to establish his reputation working with Miles Davis on his Birth of the Cool sessions in the late 1940s and this album's title is a nice nod to its antecedent. When Miles went to record for Columbia he called upon Evans for arrangements for his Miles Ahead (1957), Porgy and Bess (1958), and Sketches of Spain (1960) albums, the latter LP released four months before Out of the cool was recorded.

It features Evans on piano with drummer Elvin Jones and bassist Ron Carter as the rhythm section plus a fabulous horn section, with Ray Beckinstein, Budd Johnson, and Eddie Caine on saxophones; trombonists Jimmy Knepper, Keg Johnson, and Tony Studd; Johnny Coles and Phil Sunkel on trumpet; Bill Barber on tuba; and Bob Tricarico on flute, bassoon, and piccolo. This album was a move towards greater freedom in Evans' compositions and arrangements, but at the same time there are echoes of his recent work with Miles. It includes two great Evans compositions in "La Nevada" and "Sunken Treasure." There's also the lovely standard, "Where Flamingos Fly," George Russell's "Stratusphunk" and Kurt Weill and Bertolt Brecht's, "Bilbao Song."

This all-analog 180g vinyl LP reissue was mastered from the original analog tapes by Ryan K. Smith at Sterling Sound, pressed at QRP, and comes housed in a Stoughton tip-on gatefold jacket.