Price Now $24.99
Was $29.99
Was
Save $5.00 (17%)
Questions and Answers
Availability: In Stock
This item is in stock and ready to ship. Depending on the time of day when you place your order, it will ship same day or next business day. 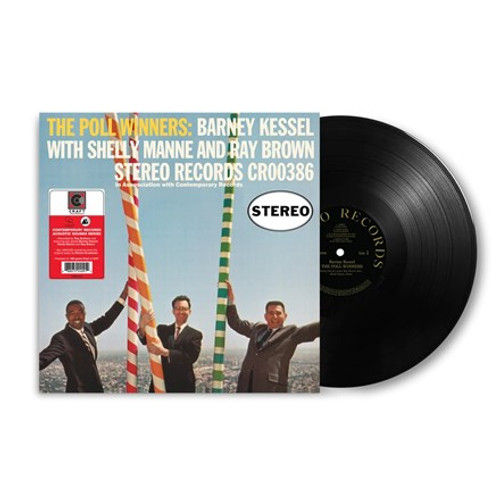 2021 marked 70 years of Contemporary Records, the Los Angeles-based audiophile jazz label that both defined and radically expanded the sound of West Coast jazz. Throughout the '50s, '60s and '70s, Lester Koenig's artist-friendly company released career-defining performances by some of modern jazz's most influential and accomplished improvisers, including Ornette Coleman, Sonny Rollins, Hampton Hawes, Art Pepper, Harold Land, Shelly Manne and Teddy Edwards. In celebrating the history of this essential label and its exceptional catalog, Craft Recordings is releasing a variety of content throughout the coming year.

A guitar virtuoso from Muskogee, Oklahoma, Barney Kessel was one of Contemporary's busiest artists between 1954 and 1963. He had already recorded with Charlie Parker, Billie Holiday and Oscar Peterson when he started making his own albums for Koenig. While Kessel spent decades playing thousands of studio dates as a member of the legendary L.A. studio cadre the Wrecking Crew, he continued to record exceptional albums for Contemporary through the 1980s.

The Poll Winners brings together the talents of Kessel (guitar), Shelly Manne (drums) and Ray Brown (bass). First released in 1957 and recorded by legendary engineer Roy DuNann this new edition features all-analog mastering from the original tapes by Bernie Grundman. The record is pressed on 180-gram vinyl at QRP and presented in a Stoughton Old Style Tip-On Jacket.